Doctor Who – Destiny of The Doctor: Vengeance of the Stones 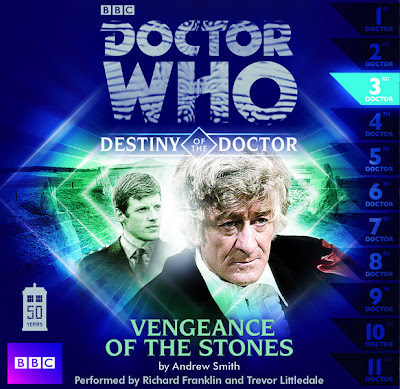 Two fighter jets are on a training exercise when one of them disappears.  UNIT has been called in to Scotland and The Brigadier and The Doctor enlist the help from a local lieutenant named Mike Yates.  Mike Yates knows the area pretty well and is soon helping The Doctor investigate a stone circle.   The stones are over a thousand years olds but The Doctor and Mike Yates seem to think that there is something unusual about them.  The Doctor soon discover that aliens have been harnessing the power of the stones and want to extract revenge against the humans for what they have done to them when they first arrived thousands of years ago.   So it’s up to The Doctor to stop the aliens from destroying the Earth and to save a young lieutenant who has a promising future.

I absolutely loved Vengeance of the Stones.  It was a really good story and we get to see some insight on how Mike Yates ends up joining UNIT.  The previous two stories have been Doctor heavy but this one is centered more on Mike Yates.  I thought this was a pretty good change of pace as The Doctor did have a fair amount of time in this story but it was good to see how Mike Yates got his foot in the door and became a regular in the UNIT stories we have all seen on TV.   It was also interesting to see him confront the aliens and what his reaction would be to them.  It was also interesting to see how he would react to The Doctor when he discovered that he was an alien.

Vengeance of the Stones is a pretty good UNIT story and I could see this story on TV during the Pertwee era during the Seventies.  Andrew Smith does a wonderful job capturing the feel of that era and the characters were done really brilliantly by Richard Franklin who does a pretty good Brigadier impersonation.   So far the Destiny of The Doctor series has been top notch and a good 50th Anniversary celebration for the good Doctor and you should be getting these audios and give them a listen.
Grade A –
Posted by DR5WHO at 8:11 PM