10 Reasons to Watch The 5th Doctor 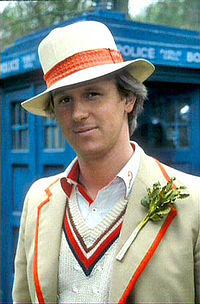 10 - New Music – while it did debut during the Tom Baker era, the new arrangement and opening titles for Doctor Who is definitely a huge change. The incidental music was finally becoming better during this time period.

9 - The Companions – a wide variety of companions, most of which work together during this era. It is good to see this team of characters (although some of the performers hated each other). You also had the first ‘bad guy companion,' Turlough, on board the TARDIS.


8 - The Bikini Episode – Throughout the history of Doctor Who we have had lots of great scenes with companions wearing clothes that were more revealing than usual but Peri (Nicole Bryant) wins the Gold Medal with her bikini scenes in “Planet of Fire.” Too bad it didn’t become her normal costume for the series.


7 - The Five Doctors – sure, it is a flawed story but seeing all those previous performers return to Doctor Who was fantastic. What a fun story. A great celebration with a reunion of characters and the meeting of others for the first time. What made this even more interesting to many fans in the United States was that many of the characters had never been seen before since the earlier episodes had yet to air.


6 - Kinda – one of my favorites of all time, this story was sci-fi at its best. The level of horror, drama and humor is perfect. A high concept with nightmarish imagery all came together beautifully.  Janet Fielding did a great acting job in this one.


5 - The Return of the Cybermen – “Earthshock” sees probably the best Cybermen story in decades (not saying much since they had only been in 1 since the start of the 70’s. The redesigned Cybermen ended up being a half way point in their evolution. Going from the sneaky and scary beings from the 60’s and finally winding up as load marching troops in the current series, these Cybermen from Earthshock were a bit of both.


4- Death of a Companion – While we had experienced two previous companion deaths, both of those companions (Katarina and Sara Kingdom) had only been in a few episodes. Adric had been in a few seasons when he bought it. Not being the most popular companion might have lessened its impact on viewers but nevertheless, a very powerful ending to that story.


3- John Nathan Turner – I mentioned before that JNT was an important reason to watch the 4th Doctor and his influence strengthened with the 5th Doctor. Gone were the padded long winded stories. Instead, visually pleasing and high brow sci-fi stories take center stage. Some of the best written episodes ever reside in this era.


2 - Caves of Androzani – If you had to pick one Doctor Who episode to show a newbie, “Caves of Androzani” may not be the best because of the regeneration but then again, it has all the elements that makes Doctor Who good. Davison outdoes any of his previous excellent performances and sells the whole story along with an incredible soundtrack and an overall near perfect production.


1 - Peter Davison – Trying to go polar opposite to Tom Baker, Davison’s portrayal may have been hard to get but it worked perfectly with the newer type of stories. He had flaws and sometimes lost. The Doctor shows his weaknesses but kept that morality that all Doctors had. 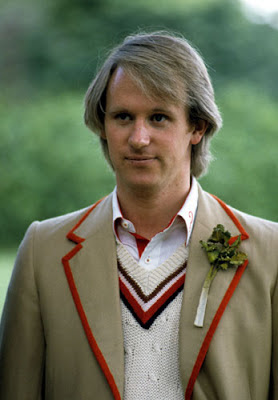 Email ThisBlogThis!Share to TwitterShare to FacebookShare to Pinterest
Labels: doctor who, Peter Davison, the 5th Doctor, top 10, top reasons to watch doctor who