Star Trek: Into Darkness – A Hopefully Spoiler-Free Review By @MAntoniaP 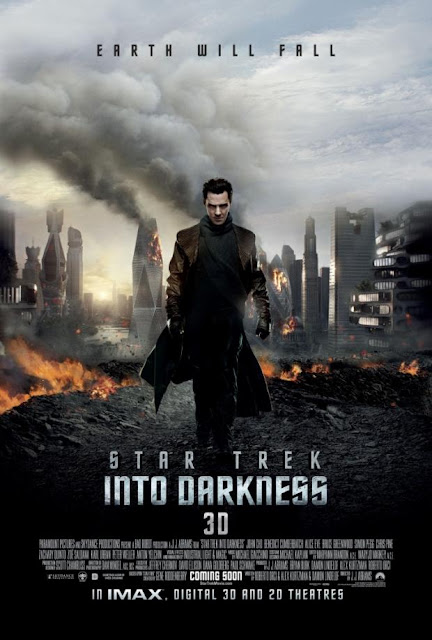 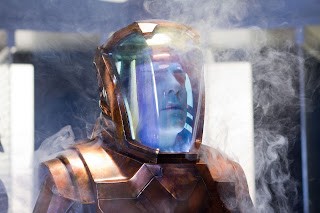 When we last saw Kirk and his crew, he was jauntily, cockily (all-Kirk) taking over the helm of the Enterprise. No mention was made then of any five-year mission-McCoy was simply told to “buckle up.” When ST: Into Darkness opens, the Enterprise is nowhere to be seen, but Kirk and McCoy (the good doctor of all people?) are racing through a strange reddish forest on the planet Nibiru, being chased by apparently primitive Nibiruans. We eventually learn that Kirk has determined to save this planet, which seems doomed to a natural disaster, and Spock, who has an integral part in the planet’s salvation.  This decision brings about some interesting conversation between Kirk and Spock later on.

Back at StarFleet, Kirk faces the consequences of his interference. In London, a despairing couple faces the loss of their daughter. The father makes a deadly bargain, orchestrating an explosion, in order save his daughter’s life.  This introduces viewers to the mysterious John Harrison. The explosion brings together the senior officers of the Federation to discuss matters. Kirk alone realizes, too late, that this meeting is truly the trap.  He is then ordered to take the Enterprise to find and hunt down John Harrison.

Kirk tracks Harrison to the home world of a race familiar to Star Trek fans. A small landing party searches a supposedly abandoned (i.e. no indigenous population) province, but is accosted by scouting ships.  When a large armed group of the aliens threatens the landing party, Uhura gets to use her linguistic skills, but fails. Before things get really ugly, Harrison appears and takes out every alien. He then surrenders, after learning an interesting bit of information. 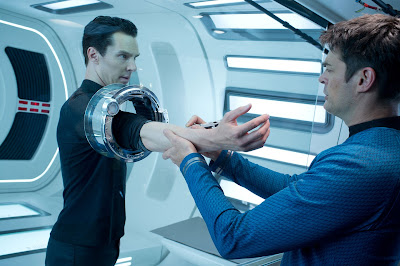 It is after his surrender that we begin to see the making of the Captain Kirk (and even the Spock) we all have come to know.  Harrison is a coldly serpentine fellow, and he knows precisely the words to darken Kirk’s soul. But in this case, the darkness is a seasoning. Neither Kirk nor Spock yet realized the elements of their personalities so vital to both their friendship and their own ability to accomplish.  Harrison provides the catalystic agent both need.

Most of the characters do what they always do. McCoy quips and makes sarcastic remarks. Scotty whines but is his usual engineering genius self.  Uhura has some brilliant moments, and one, quite amusing, conversation between her and Spock reminds us that this indeed is a rebooted Star Trek universe.  Chekhov does an engaging turn as he has to head engineering in Scott’s absence.  Sulu gets to feel what it is like temporarily in the captain’s chair.  The movie contains a lot of action, and general movie-goers will enjoy the tightness of the story, the tense drama and the fast pace.

The balm to Star Trek fans is of course the Kirk and Spock story. To watch these two work through that they can be friends, no detriment to either, is a joy and an inspiration that original Trek viewers never really got to enjoy at its fullest. 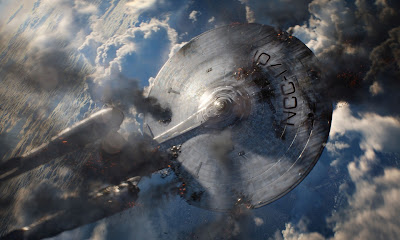 Go into the Darkness, and leave completely satisfied.