Synopsis For Big Finish's Doctor Who "The Lady of Mercia" 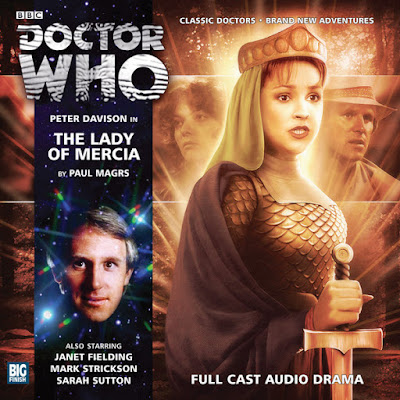 Big Finish's main Doctor Who range continues with the 5th Doctor, Tegan, Nyssa and Turlough with yet another adventure this time set on Earth in 1983.  You can order it here.

The TARDIS brings the Doctor, Tegan, Turlough and Nyssa to the University of Frodsham, close to where the warrior queen Æthelfrid fought a desperate and bloody rearguard action against the savage Danes. Over a thousand years later, in 1983, battle is still being raged, with student activists taking on savage funding cuts… and disrupting a conference about Æthelfrid convened by history professor John Bleak.

Meanwhile, over in the Physics Department, Dr Philippa Stone is working night and day on a top-secret project – but can her theoretical time machine really be the solution to the university's problems?

Present and past are about to collide – and the results, as the TARDIS crew is about to discover, will be far from academic!