Doctor Who - Nightmare in Silver Review - (Some Spoilers) 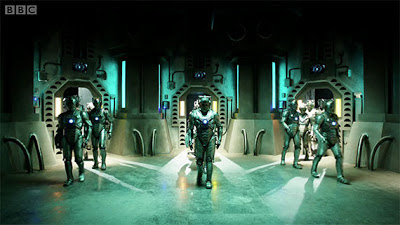 Sometimes you look forward to things so much that there is no way they will ever reach those bloated expectations. Look at the facts. Despite some fan opinion that this last half of season 7 has been sub par, the stories have been more focused and paced. The stories, for the most part, have concentrated on the Doctor and Clara and their involvement in their adventure and less about an upcoming deadly danger or secrets being kept by some annoying winking woman or who is really the Doctor. The stories have been stand alone and enjoyable. I attribute this to the writing, the acting and the chemistry that has been given time to develop between the Doctor and Clara, the best Doctor, Companion duo since the 10th Doctor and Rose. 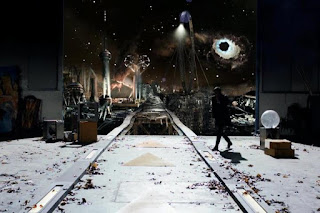 Then you have Neil Gaiman who is responsible for one of the better Doctor Who stories in the past few seasons, “The Doctor's Wife” now writing a Cybermen story. This coupled with the fact that the series has been on a roll of late and you are looking at potential for a major let down since everything looks so good for potential greatness.

As we saw last time, the kids that Clara watch have stumbled across photos of Clara from her time travel adventures. Not sure why the Doctor would allow posed photos of them to be taken knowing that they could be seen by people she might know – oh, okay, of course, what are the chances someone would see these photos. There are over 65 trillion photos online* and of course one of the few that know Clara would find them and wouldn't think that they photoshopped. Being photoshopped would be a logical explanation. Of course who took those pictures and why is a bit of a mystery in the first place. 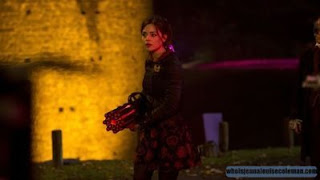 Anyway, so suddenly the kids have blackmailed the Doctor into going on a trip in the TARDIS and of all the places the Doctor could take them, he brings them to the location and time of greatest danger which the kids promptly fall into and are almost killed.

The Doctor recognizes that the Cybermen might be around and decides to take out his psychic paper (didn't Gaiman get the memo that the series has moved on from that easy plot device and instead is using the sonic screwdriver as a magic wand?). The most inept military in the Universe is on the planet with a real bomb – not sure how that happened but the Doctor feels no confidence in them and so puts Clara in charge. Not sure that was the right move but okay. 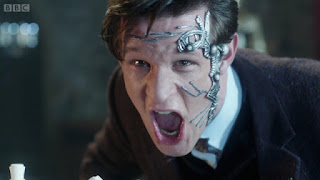 Several of them are partially cyberized by Cyber Mites. These little guys are an upgrade from Cybermats and are much smaller. Even the Doctor is infected and spends most of the rest of the episode battling the takeover by the Cyber mind. This sounds great but why is it that the Doctor's Cybermen side is acting all goofy. Shouldn't it be the eccentric and funny Doctor vs the logical and unemotional Cyber Doctor? That would have been incredible. Instead we have a jokey, evil Doctor which didn't seem to be a Cyber product at all. An example of this comes from the trailer to this episode. In it the Doctor looks like he has been partially transformed and is yelling something mechanical. I did not understand that he was saying “They're here!!!” Instead I thought it was part of the transformation starting to take control and he was yelling in agony trying to fight it. Instead it was his evil side quoting “Poltergeist” and being clever and funny. What a wasted chance there. 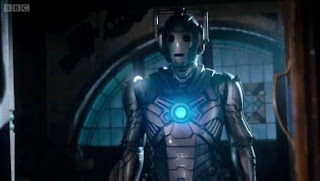 Lets talk Cybermen. These Cybermen are upgraded and are actually pretty cool. They are no longer the clomping soldiers that so many current Doctor Who fans love. Instead they move fast and quieter and are able to adapt. But wait, they seemed too much like the Borg with this ability to adapt – yes, but the Cybermen came first so there. I like the changes and I won't mention them all in case you haven't seen the episode yet.

Clara did have some good moments with the Doctor, both versions, and this was a welcome return as last week had little if any interaction between them. Warwick Davis had a good part as Porridge.

The set design was pretty good for the desolate carnival planet but it would have been great to see some more of it.

With the upcoming 50th Anniversary a few months away, bet you were surprised to see all the Doctors in this one. Sure, it is just a fleeting glimpse but still a nice little bit that shouldn't generate too much discussion, but it will.

I am a bit confused about when someone is taken over by the Cybermen.  It seems that when you are the Doctor or children the Cyberization can be reversed but when you are Webley in this episode, you are left behind to die.  I also didn't like the superior technology (Teleport)  that just shows up at the end to save them. 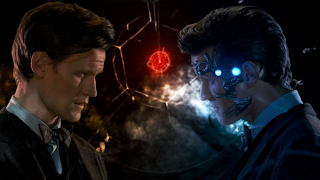 “Nightmare in Silver” is a mixture of good and bad and does not live up to the expectations of the latest episodes, nor the caliber of Neil Gaiman's writing. The bad moments were easy fixes so I won't totally condemn this story. Instead I put it in the lower end of this half season which is not where I wanted to see it.

Speaking of the season, the finale approaches and while I am not looking forward to an episode all about the Doctor and his name and seeing tons of characters of the past season or so, it does look, from the trailer, to be a bit nightmarish and spooky enough to get my interest.