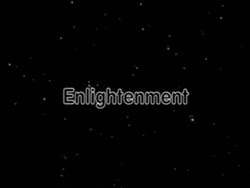 Doctor Who:
Enlightenment
By Barbara Clegg
Reviewed by Paul Bowler

"I would point out that under our agreement, it is mine. Unless, of course, you wish to surrender something else in its place. The Doctor is in your debt for his life. Give me the Doctor, and you can have this, the Tardis, whatever you wish."

When the Doctor (Peter Davison), Tegan (Janet Fielding), and Turlough Mark Strickson) receive a dire warning from the White Guardian the TARDIS lands on board the SS Shadow, an Edwardian sailing yacht, which they discover is really a spaceship that is taking part in a race against other sailing vessels. The crew of the ship are Eternals, beings who exist outside of time, and they are racing each other across the Solar System to claim the most treasured prize in the universe - Enlightenment. 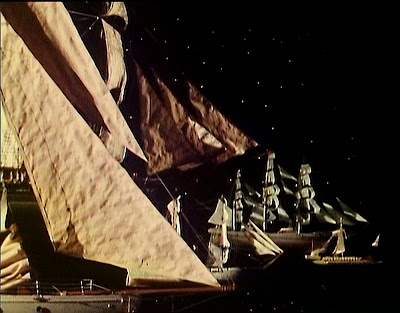 The Doctor tries to keep the TARDIS secret from Captain Striker (Keith Barron), but the Eternal learns of the time machine with his telepathic powers and prevents the Time Lord and his companions from escaping. When other ships in the race are mysteriously destroyed the Doctor begins to suspect foul play. Tormented by his secret pact with the Black Guardian (Valentine Dyall), Turlough jumps overboard, only to be rescued by a pirate ship, the Buccaneer, where he is taken to meet Captain Wrack (Lynda Baron). 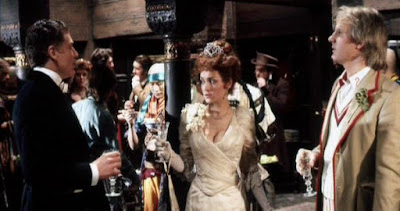 Turlough discovers that Captain Wrack is secretly in league with the Black Guardian and has a deadly weapon on her ship that concentrates mental energy. Captain Wrack invites the crew of the SS Shadow to a dinner on board the Buccaneer, where he hypnotises Tegan, placing a focusing crystal in her tiara that will destroy Striker’s ship. Later when Captain Wrack is defeated the Doctor and Turlough steer the ship towards the gleaming crystal structure that is Enlightenment, winning the race, and defeating the Eternals. 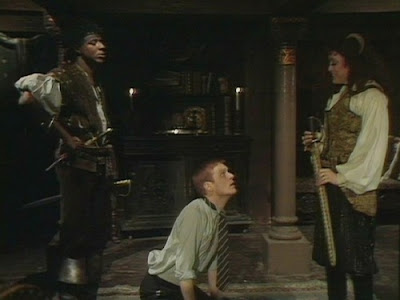 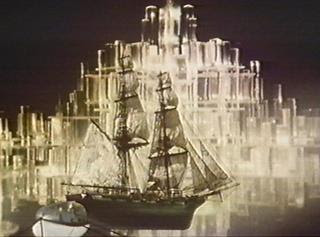 Enlightenment is one of the highlights of the twentieth season. This is a great story by Barbara Clegg that brings the Black Guardian Trilogy to a satisfying conclusion. Right from the opening moments in the TARDIS, which look really spooky with the dark lighting, as the action shifts to the Edwardian yacht the claustrophobic atmosphere of the story continues to build. The attention to period detail is remarkable and the costumes are brilliant, director Fiona Cumming really makes you believe you are a on a sailing ship, perfectly building up to the astonishing reveal at the end of episode one. The model sailing ships are also of a really high standard, as are the scenes where they skim close to the planets and the final port of call at Enlightenment itself. 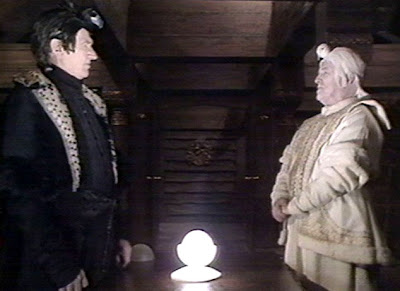 The Eternals are beings who exist outside linear time, dwelling within eternity itself, they fill the emptiness of their existence by feeding off the thoughts of their human crew - who they have kidnapped and brainwashed to do their bidding. Captain Striker is a cold and calculating adversary for the Doctor, but it is his first officer Mariner (Christopher Brown), who develops a creepy fixation on Tegan, that really illustrates how parasitic the Eternals really are. Janet Fielding is really good in Enlightenment, she gets plenty to do in the story, and she really conveys Tegan’s disgust when she turns on Mariner and blocks her thoughts so he cannot read them. 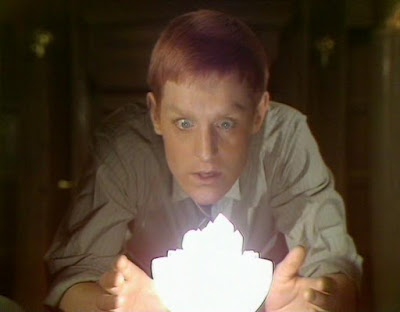 The Black Guardian has another ally in this story, Captain Wrack, and Lynda Baron gives a marvellously over-the-top performance as the evil Pirate Captain. It’s also good to see Valentine Dyall and Cyril Luckham return as the Guardians from the Key to Time saga, and Valentine Dyall is brilliant as the chillingly evil Black Guardian… This story also brings Turlough’s story full circle, with Mark Strickson giving one of his best performances as the character. There are some quite shocking moments in Enlightenment as Turlough has to come to terms with his actions. His deal with the Black Guardian rapidly begins to sour, sensing that he is doomed; he desperately tries to commit suicide by jumping from the deck of the SS Shadow. After being rescued by Captain Wrack his loyalty to the Doctor is challenged again, until he finally chooses Enlightenment at the end of the story - finding his own redemption and defeating the Black Guardian. 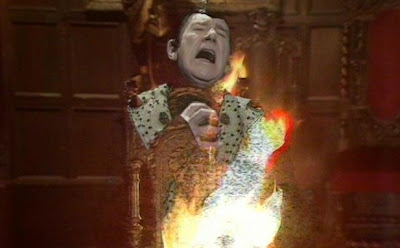 Enlightenment is one of my favourite stories from Peter Davison’s tenure as the 5th Doctor is always right at the heart of the action, quietly guiding his companions, and always managing to stay just one set ahead of the Eternals and the Black Guardian’s plan. He even acquires a new stick of celery on the Buccaneer, which is strange as everything created by the Eternals is not actually real, but it is still on the Doctor’s lapel at the end of the story. Enlightenment is a fascinating story, full of great performances and special effects, and is a real jewel in the crown of the programmes twentieth anniversary year