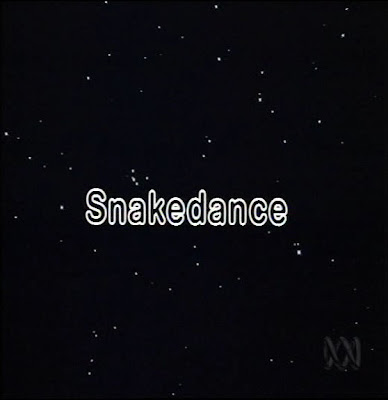 Doctor Who:
Snakedance
By Christopher Bailey

“This is, here and now. The dance goes on. It is all the dance, everywhere and always. So, find the still point. Only then can the Mara be defeated.”

Tegan is once again being haunted by The Mara and she fears she will be under its influence once again.  She has unknowingly set the coordinates for the planet Manussa which is a planet with a heavy history with The Mara.   The Doctor makes up a gizmo that will help Tegan fight off the Mara by keeping her in a sort of sleep type state.  It doesn’t work as the Mara takes her over and is now loose on the planet Manussa.

Tegan goes and recruits Lon who is the son of the Federator.  With him under their control the Mara will have access to the great crystal.  With the great crystal the Mara will be able to take over the minds of everyone and will be able to take control of the planet and be all powerful again.  The Doctor must find a way to stop the Mara and to free Tegan and the answer might hide in the hills with an old snake charmer. 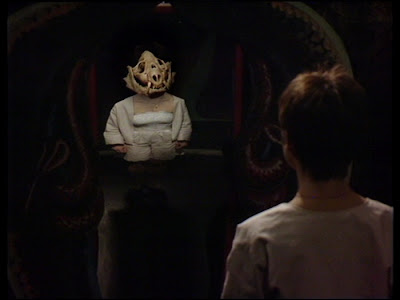 The old snake charmer Dojjen encourages The Doctor to be bitten by a snake to commune mentally with him and he tells The Doctor that the only way to defeat the Mara is to find a still point within him and to not be fearful as the Mara feeds of fear.  So it’s up to The Doctor and Nyssa to figure out a way to save Tegan and to stop the Mara once again. 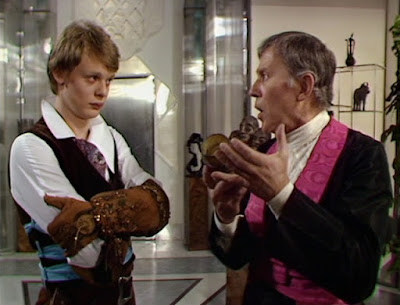 Snakedance is the season 20 sequel to season 19’s classic Kinda.  While not the classic story that Kinda was it did have some nice moments and was a pretty decent story in its own right.  Plus it has none other than Martin Clunes in it. Yes Doc Martin himself in one of his first television appearances.  Snakedance heralds the return of the evil and manipulating Mara and yet another silly looking snake. 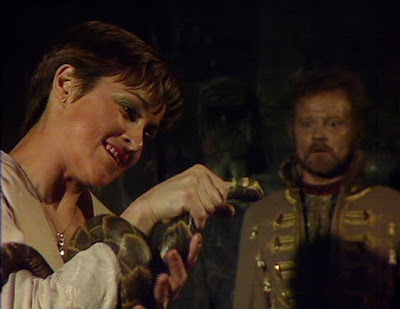 Snakedance brings us another great performance by Janet Fielding as she once again plays the evil Tegan possessed by the Mara. This time we don’t get the insight into her mind instead we are forward ahead to her possession and the havoc she is going to unleash on the planet of Manussa. In order to take over Manussa and extract revenge for their defeat from 500 years ago the Mara will need help. They get the help they need by taking over Lom the Federator’s son and by using the great crystal to once again gain corporal form 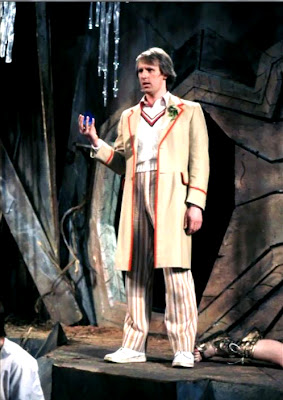 I really enjoyed this story as it gives us another chance of seeing The Doctor and Nyssa working together which in itself could have been a good pairing if there weren’t so many companions during the 5th Doctor’s era.  Snakedance also used witchcraft instead of science to win the day as The Doctor used the venom of a snake to go into a trance to communicate with Dojjen and to learn about the crystal and how to stop the Mara.  Which was something not done before on Doctor Who. 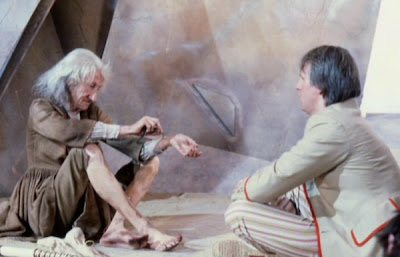 Snakedance keeps up the tradition from Kinda of having a pretty bad looking snake.  But I have to admit the one in Snakedance isn’t as bad as the one in Kinda.  It was probably due to the fact that they didn’t try to do something large scale.  Well, they did try to superimpose Tegan’s head inside the mouth and that looked bad.  Well yes it was quite comical and at times painful to watch. 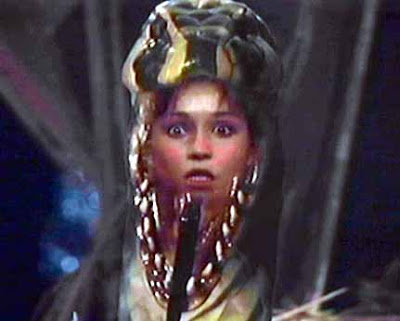 Snakedance is one of those stories that is fun to watch as it is one of those traditional Doctor Who stories where good overcomes evil and The Doctor finds a way to save the day without the need of technology most notably the sonic screwdriver.  He uses his mind and outwits the enemy.  This is possibly why I like it so much. Well and the fact that The Doctor shows Doc Martin who the best Doctor is.