Earlier this month we asked for submissions by email or in the comment section.  We got a few and now we would like to share those with you on the eve of the 50th Anniversary.  Hope you enjoy them.

My first memory of Doctor Who was watching the Peter Cushing movies in the 70’s. For the series, it was the Channel 9 airings of the Tom Baker era and later on PBS in the 80’s. When volunteering for a Doctor Who event during the 1987 Doctor Who traveling exhibit I made contact with the local PBS Channel and soon got an internship there which led me to the job I have had for over 20 years!


That same Traveling exhibit led to the formation of the local Doctor Who fan club, The Knights of the White Guardian. At this club I made life- long friends and made so many memories over the years.

I used to love going to conventions. Hanging out with friends and meeting so many Doctor Who celebs was a highlight for years. My favorites were Visions in Chicago and United Fan Con in Springfield MA. One of my fondest celeb memories was having lunch with Deborah Watling (Victoria), John Levene (Sgt. Benton) and David Banks (Cyberleader) at one of the Visions Conventions.

Happy Anniversary Doctor Who and may you entertain future generations as much as you have entertained us over the years. 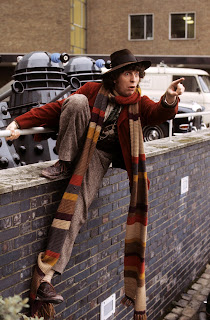 The first episode I ever saw was the 2nd episode of Tom Baker's "Robot" story. Channel 57 had been promoting the new show and it was shown after school (I think it was spring of 3rd grade). I think I had baseball practice and missed the first episode. I remember being excited about the show because it was different than anything else on TV at that time (this was 1983 and we only got 4 channels). I think I was initially attracted to combination of sci-fi, military w/UNIT (I used to like reading war comic books), Sherlock Holmes style problem solving, and adult humor. Then the 2nd story they showed was Ark in Space (out of order) and I was hooked - that story was phenomenal - both scary and emotional, I was really invested in the outcome. I think channel 57's showing one episode a day really hooked me since you had something to look forward to each day.

My favorite episodes early on were ones that revealed more about the Doctor Who universe, like the ones on Gallifrey and the Key to Time stories. They ran all the Tom Baker stories and then when he regenerated they went back to the Robot again - I was disappointed as I wanted to see what happens next but I still watched all of them a 2nd time. They showed the 5 Doctors right after it aired in the UK and that was my introduction to Peter Davidson. I thought it was really cool to see all the Doctors - I didn't mind that Baker wasn't in it since I had already seen so much of him. After the 2nd run of Tom Baker I think they then showed Pertwee. I remember the first Pertwee story I saw was Inferno - they ran it on a Saturday night and I watched it at a sleep-over at a friend's house. I liked the style that the story was shot in as it felt like a movie.

I remember that my best friend at school and I were so into the show that we played "Tardis" on the playground around one of the trees that were up against the fence and we would get made fun of for it, but we were so into it that we didn't care. I would buy and read all the Doctor Who books I could find at the local bookstores. The first magazine I bought was called Fantasy Empire - the issue had articles about Doctor Who, Monty Python, and Sapphire and Steele. I also loved the Doctor Who comic book and bought every one I could find at Treasure Island in downtown Springfield.

Doctor Who changed my life in one major way - meeting many of my good friends at the Knights. When I first joined the club, I was one of the youngest members and I looked up to everyone. I went through many changes in my life since then but the Knights has been one of the many constants in my life. In the early days of the club, Sylvester McCoy was on the air and Doctor Who was still being shown on channel 57 - we worked the phones at a couple pledge drives and that was a real bonding experience (I joined the club after seeing the group on a pledge drive and getting their information from the station).

Through the Knights, I then discovered conventions and it was great to meet many of the people from the show (the highlight for me was Tom Baker in Long Island). Once new episodes stopped airing in the UK, I stopped watching and moved onto other shows, but Doctor Who was still always my all-time favorite show. The new episodes re-sparked my interest in the show and it's been great to see young people fall in love with the show like I did many years ago. 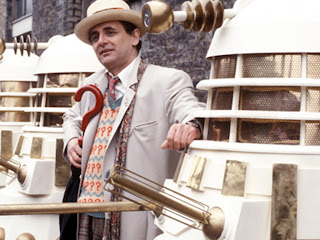 I am sending this to because of my mom, she gave me the newspaper today because she get her paper delivered today, and it was the Sunday Republican, and in the newspaper of section G Leisure & Lifestyle and she told me, there is something for me to read, she gave me the paper and I was like yeah of course I knew Doctor Who was going to be celebrating their 50's anniversary and I was a huge fan of Doctor Who, and I watched Doctor Who since I believe it came here in MA, around mid 80's I think that is right. I usally remember watching them on channel 2 of PBS or WGBY, but it was long time ago on a Saturday. I always stay tune of watching that show, even my family still talk about Doctor Who, even I am a fan, and while I was reading the newspaper I found your blog, on the newspaper and why not go there and see what it is like. So I did and I kept it into my favorites.

I was reading  your blog and I bump into November 13, 2013 of something you said: Talk about your favorite Doctor Who or favorite episode. So my favorite doctor is a tie: I love the 4th Doctor Tom Baker he was so good in that part and I love Tom Baker he is the best Doctor, of all time. I was not a big fan of Peter Davidson or Colin Baker. But I did enjoy Sylvester McCoy the 7th Doctor. The reason I enjoyed Sylvester was not about Mel. It was about Ace, she was the best. I loved Ace, even when she came on that show, she was a tough cookie. I enjoy her, through so many episodes, even I have some of the Doctor Who episode of Tom Baker, Peter Davidson, Sylvester McCoy, I also have tapes of the 1st Doctor as well. I have a lot. But my favorite episode in Tom Baker is City of Death, and for Sylvester McCoy my favorite episode of him his Ghost Light!!!
Posted by DR5WHO at 2:22 PM