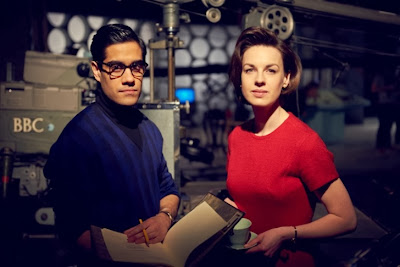 
Sacha Dhawan takes on the role of the director of the first episodes of Doctor Who, Waris Hussein. Here he talks about how An Adventure In Space And Time deals with the challenges Waris faced as the first Indian-born drama director at the BBC and using music from the Sixties to get his swagger.

Born in India, Waris Hussein was the first Indian director at the BBC. He directed the premiere Doctor Who story, An Unearthly Child, and returned to the series in 1964. A graduate of Cambridge, Hussein was faced with a number of tests when he joined the BBC and like Hartnell, was not particularly enthused by the idea of directing a show for children.

“There were definitely challenges for Waris at the time, but I think in the longer term it made him a better director,” explains Sacha. “And I think Doctor Who was one of those projects that gave him immense confidence.”

Following on from Doctor Who, Hussein went on to have a long career directing a variety of projects from ‘A Passage To India’ to ‘Shoulder To Shoulder’.

As well as touching on the issues of being an Indian director at the BBC in the 1960s, the drama explores the bond between Hussein and the producer Verity Lambert, who struck up a strong friendship and who became a committed team. He went on to work with Lambert on several other productions after Doctor Who.

To research the role, Sacha spent a lot of time with Waris, first meeting him at a public screening of the episodes he directed.

“He is quite a specific character and I wanted to make sure that I played him as truthfully as possible,” explains Sacha. “He has a particular way of speaking as well, which I really wanted to hone in on.”

“We were a bit kind of weird with each other; we were both studying, looking at one another. He was looking at me thinking ‘You’re watching everything I’m doing aren’t you?’, but we hit it off straight away,” he says.

Hussein attended one of the first scenes Sacha filmed showing Lambert and Hussein in the BBC club. “He started welling up and getting quite moved by it,” says Sacha. ”I hope that was in a good way and not a bad one, but I think he seemed happy.”

Sacha was excited to tackle a period setting he’d never done before. “When I first read the script, it was the era that really excited me. I’d never done anything in this kind of genre. The 1960s is so cool; I love the set and the clothes. As soon as you wear them, you act in a certain way; you walk in a different way.”

And to get in to the right frame of mind Sacha dipped in to his music collection: “I listened to loads of Sixties music on the way to work, to get a certain kind of swagger,” he explains.
So how would he sum up ‘Space And Time’?

“I think it appeals to those who aren’t necessarily Doctor Who fans. I was very moved by the script, particularly William Hartnell’s journey, which I relate to as an actor myself,” he concludes.

Email ThisBlogThis!Share to TwitterShare to FacebookShare to Pinterest
Labels: An Adventure In Space and Time