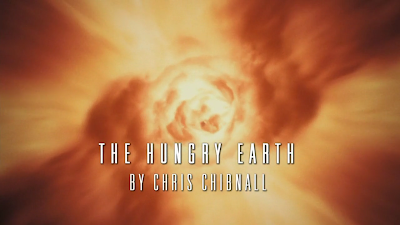 Doctor Who:
The Hungry Earth/Cold Blood
By Chris Chibnall

The Silurians make their return to Doctor Who after a 26 year absence to threaten mankind and take the Earth back for them. These Silurians look a lot different from the ones we have seen in Classic Who. For one they are green not orange, two they do not have their third eye, and three the majority of the warriors are female. So in essence as the Doctor describes this is a different tribe/race of Silurians but not that much different. Except they sting poison into their enemies with a poorly looking cgi tongue. 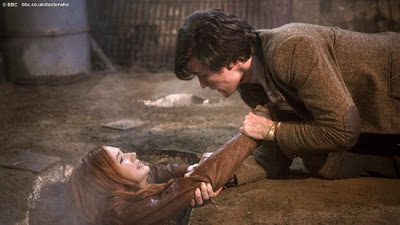 It is good to see Chris Chibnall deliver a good Doctor Who stories unlike his Torchwood ones and well the one that comes in Series 7 that has Dinosaurs in it. For the most part Chris Chibnall rehashes an old plot line that was used before in the classic series. Silurians wake up and want to take the Earth back from the apes. The Doctor tries to make peace between the two races and of course a human does something stupid and ruins it. Sort of like the 3rd Doctor story The Silurians that came out in 1970. (This is also out on DVD so go buy it and watch it again.) So the originality is not there but the way they intertwined it for today’s audience worked pretty well.

For instance the whole mystery of why the Earth was sucking people into the ground was pretty good. Watching The Doctor scramble around to find answers after Amy was sucked away was classic Who in itself. This story harked back to classic traditions of no weapons and do not kill. This is present in the scene where the Doctor tells Ambrose no weapons your better than that. This two part story definitely had the feel of a Pertwee episode which suited me fine. 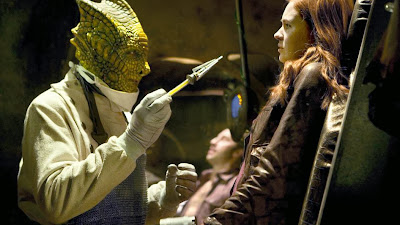 It really did have that Pertwee feel to it especially when they were trying to make a peace treaty between the humans and Silurians. That could easily have fitted in a 3rd Doctor story. In fact Chris Chibnall did a good job capturing that era for this two part story.it also showed the ugly side of humans that would do almost anything that wasn’t in their nature to help the ones they love. Even if it comes to killing. 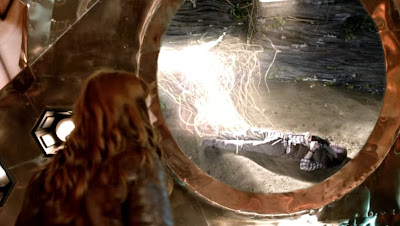 In Cold Blood there were more revelations going on. Not only did we get the classic ending to a Silurian story that we have seen before but we got quite a bit more pieces to the overall storyline. First we see Rory get killed by the Silurians. That’s right a companion actually dies but don’t worry he comes back and dies again which ends up being a running gag by the fans. Not only that but he gets absorbed by the crack and never existed. As we see the Doctor doesn’t forget Rory but Amy sure has which will be played out later in the Series 5 finale. I’m sure since he is in the crack we will see him again at some point in the final two parter of the season but as Auton Rory instead.

The thing that really got me was what the Doctor pulled out of the crack itself. This is the cool part. It appears to be a piece of the TARDIS. I’m starting to wonder if the crack was formed by the TARDIS exploding.  At the time we has to wait until the season finally but it was pretty interesting knowing what happens when watching this again. In all a very good episode that has quite a few twists in it.
Grade B
Posted by DR5WHO at 11:28 AM