Doctor Who - The Light at The End Review (Spoiler Free) 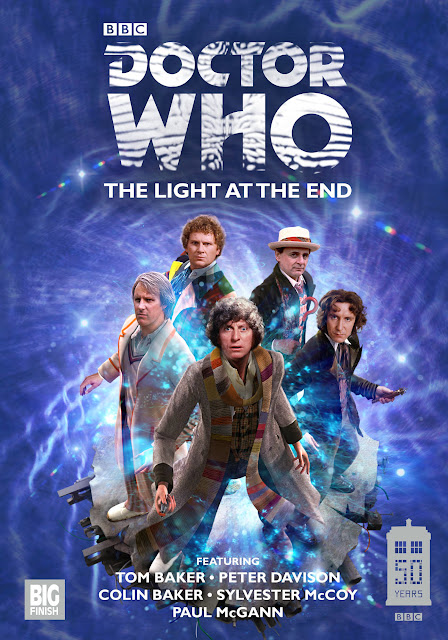 It is the 50th Anniversary of Doctor Who and everyone is getting all excited and celebrating in their own way.  The BBC is doing the biggest of the celebrating with “The Day of The Doctor” and the Docudrama An Adventure in Time and Space and everyone is excited about that.  Not to be left out and forgotten is Big Finish. Big Finish has been doing audio adventures of Doctor Who for several years and this year they have released their own Doctor Who 50th Anniversary Special “The Light at the End.”  It stars the surviving 20th Century Doctors and a whole bunch of companions and has some surprises in it as well that will please the hardcore Doctor Who fan.


The story is just brilliant.  A great way to get The Doctors together by having The Master mess with their timelines and having them work together to solve the problem.  What made it work is that the five Doctors were paired up at first and then come together at the end to defeat the Master.  I really liked this as each Doctor had ample time and you got to hear the different personalities work with each other instead of a group where one Doctor might be left out.

The story was pretty clever and the messing with the timelines was a good way to get rid of The Doctor’s companions from the story.  With all these characters you don’t need a story being bogged down by to many characters and getting rid of the companions early on was a good thing.   What I really liked was having Doctor’s 1, 2 and 3 included also with someone else doing their voices.  By having them muffled in the time vortex and almost like ghosts was a nice touch.  I’m really glad they included them as it would not have been an anniversary story without the three that got the ball rolling.  Their inclusion was a great surprise and wonderful gift from Big Finish and it really made the story even more special.

“The Light at The End” is a wonderful story that needs to be heard.  I’m not going to give anything away so you need to listen to it yourself to form your own opinion.  I did really enjoy Geoffrey Beavers as The Master and everytime I hear him on a Big Finish audio adventure I always wonder what could have been if he had been cast in the role as the human Master after “The Keeper of Traken” where he played the decaying Master.  He sure sounds evil and menacing and it would have been really different from what we got instead.  Geoffrey Beavers performance in The Light at The End was really good and another reason to listen to the adventure.

“The Light at The End” is a really good anniversary story and one where you wished the BBC had attempted to get all the Doctor’s together. (Maybe they did we just have to wait and see) We have the 20th century Doctors joining forces to stop the Master yet again and it is just a story that will appease the hardcore fan with a strong story and lots of new moments to enjoy and we get all the Doctors together for a fun romp.  “The Light at The End” is worth buying and an excellent addition to your Doctor Who collection.
Grade A+
Posted by DR5WHO at 8:25 PM