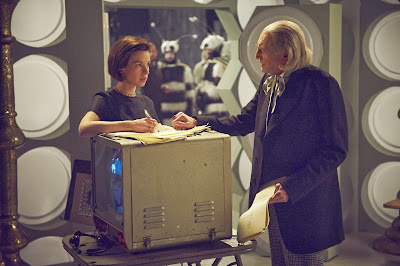 Star of Call The Midwife, Jessica Raine takes on the role of Verity Lambert, the first female drama producer at the BBC and the first ever producer of Doctor Who. Here she explains what it was like stepping in to the shoes of such a formidable woman and the importance of making sure they showed the fun side of Verity.

“She was very strong willed, very compassionate and very warm,” Jessica is talking enthusiastically about Verity. “As the first female drama producer at the BBC she had to be very determined,” she continues. “She had a real fire in her belly about projects she believed in.”

Verity Lambert began her career at the BBC in June 1963 having followed ABC’s former head of drama, Sydney Newman to the corporation. Lambert oversaw the first two seasons of Doctor Who, eventually leaving in 1965. It has since become the project she is most famed for.

In An Adventure In Space And Time one our first introductions to Verity is at a swinging Sixties house party, which according to Jessica shows the lesser known fun side of the producer.

“We concentrate more on her work, but we do get a little slither of the fun side of Verity,” says Jessica. “Apparently she used to hold these art parties and invite the artist and all of her mates around and have a sort of exhibition, a bit of music and a bit of dancing.”

Well known amongst Doctor Who fans, Sydney Newman once described her as full of ‘piss and vinegar’ and claimed hiring her was one of the best things he ever did.

So what research did Jessica do to prepare for the role?

“For any role I pretty much always go to the script, first and foremost. While I was auditioning I did look for video clips, but they were all from recent years, she explains, but it was interesting to see her. I felt she was very composed, very classy, very warm, but you could see real steel there."

"I also watched the original episode that Verity, Waris and Sydney, to a certain extent, created and I was really struck by how it holds its own," she explains. "It’s eerie, weird, intriguing and it’s incredible that they were able to do that on such a miniscule budget.”

Playing such a formidable character, does Jessica see any similarities between herself and Verity?

“I guess I didn’t quite realise how determined I was to act, I really did plug away for it for a while, so I suppose I am in a way. I like that Verity’s got quite a twinkle in her eye. It would be very flattering if anyone compared me to her.”

Telling the story of the genesis of Doctor Who and the many personalities involved, An Adventure In Space And Time’ sums up a moment in television history and the start of the world’s longest-running science fiction series.

“I think it encapsulates a time in the Sixties when we’re on the brink of this huge change - and it does it really subtly," explains Jessica. "We’ve got Verity Lambert walking in to the BBC, who is a woman. We’ve got Waris Hussein, the first Indian director at the BBC. The stakes are very high and that reflects what was going on in society at the time."

Apart from reflecting the societal changes at the time the drama explores the origins of one of the world's most recognisable monsters, the Daleks.

“I actually do remember being really afraid of the Daleks”, explains Jessica. “I was just terrified of their horrible voice which I always equated with the voice on the tube. We used to go up to London, because I was from the countryside, for a London weekend and the tube voice, 'mind the gap' used to always remind me of the Daleks so it was just a terrifying experience!”