Doctor Who - Farewell Matt: The Beast Below 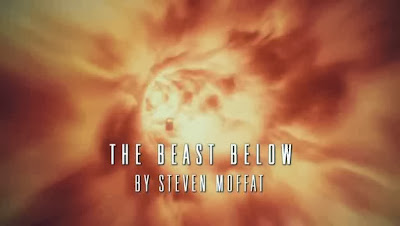 Doctor Who:
The Beast Below
By Steven Moffat

“What I always do. Stay out of trouble, badly.”

Amy Ponds first trip in the TARDIS is to the future. The Doctor brings her to the United Kingdom of Britain a spaceship colony floating in space. There the adventure begins as there is a mystery to solve which is centered on where the missing kids have been taken and what is the deal with the villainous Smilers. 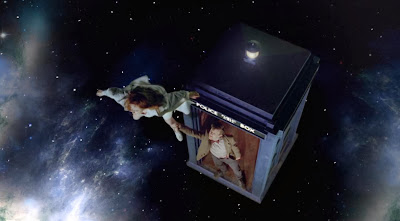 This was a pretty average story with a good abundance of things going on to keep you interested. The Beast Below is your average story about humans mistreating an animal or in this case a space creature that happens to be the last of its kind. This is the type of story that is about the moral dilemma about who to save. Either save the creature or the humans the Doctor must choose. Yet again Doctor Who starts off with a new companion by going to the future and then the past. This time it is the future while the next story is set during World War 2. It is a tad bit predictable doing stuff like which continues with Clara. Maybe when Clara replacement arrives they do something different like future future or past past or something like that

I liked the Smilers. They were a creepy, scary robotic creature that had at least 3 different faces that changed when the head turned 360 degrees. Plus they sat in a carnival type booth that you would find in a Coney Island arcade on the boardwalk somewhere. But the coolest surprise was when they got up and walked out of those booths. That was cool I like scary stuff like that and Doctor Who is famous for great moments like that. 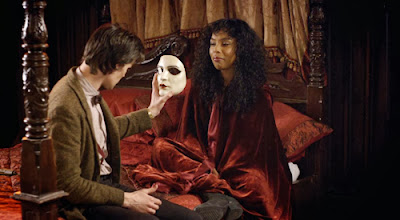 The Beast Below had a great guest star in Sophie Okonedo who was nominated for an Oscar for Hotel Rwanda played Liz 10. Liz 10 is the queen of England or what’s left of it. The scenes she had with Matt Smith and Karen Gillian were pretty good and made the story all the more enjoyable. The one scene I did like was when The Doctor and Amy where in the beasts stomach. That was pretty funny seeing them all slimed up and then making the beast throw up so they can escape. That scene was a bit gross even if it was funny.

I just could not get into this story. It was just ordinary and a tad medicore even though it conveys a strong message about animal abuse. It was just not all that exciting and frankly not one of Steven Moffats best efforts. But looking back on it now I still do not like it and the overall story is just bland. Lucky for us the rest of the series has only one more clunker. 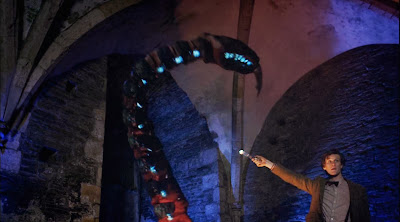 Matt Smith’s Doctor really shines in this story as he finally gets his feet wet and brings out his version of the Doctor. So far I like Matt Smith’s Doctor as he brings an air of seriousness with a tad of light hearted silliness which is a complete departure from David Tennant’s Doctor. Almost like Patrick Troughton which is not surprising since he watched the Second Doctors stories as research for the part. Matt Smith has claimed that The Tomb of The Cybermen is his favorite Patrick Troughton story.

The Beast Below is not the greatest story of all time but it is not the worst but it is one of the weakest stories in the Matt Smith era.
Grade C

Email ThisBlogThis!Share to TwitterShare to FacebookShare to Pinterest
Labels: 11th Doctor, doctor who, Matt Smith, The Beast Below