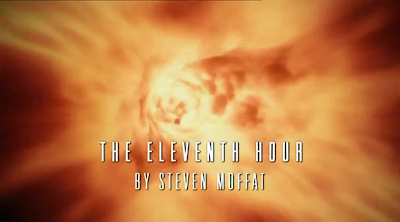 Doctor Who:
The Eleventh Hour
By Steven Moffat

“Do I have a face that no one listens to, again?”

Well the waiting is over and the Matt Smith era is finally under way and it wasn’t much of a wait back in 2010.  Sure we saw about 30 seconds of him at the end of The End of Time but now we have his first story and 65 minutes worth.  Well worth is the key word here as many fans watched with anticipation. Was it worth it?  The hype, the buildup, the interviews and clips of Matt Smith and Steven Moffat selling us on his version of Doctor Who. Would they be up to the challenge of the highly popular series of the past 5 years? More importantly could Matt Smith live up to the popularity of David Tennant who was so popular? 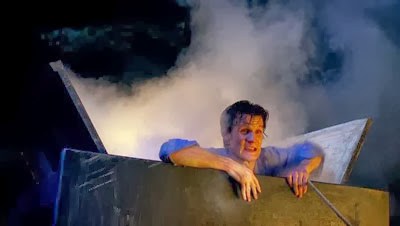 Well so far the answer is yes. So far Matt Smith has been excellent. Is he as good as David Tennant?  Well that isn’t for me to say but you would have to say he is on par with him. At the time of The 11th Hour I needed a whole body of work to make that comparison and now we have that. So far though, after watching The 11th Hour my first impression was this new guy is pretty good. I’d like what I had seen so far from Matt Smith and it got me pretty excited for the rest of the series. 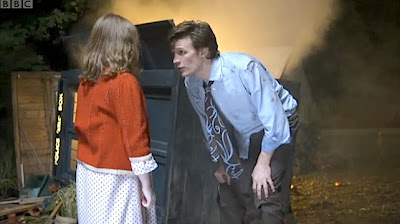 I also like the new companion also. Besides from being attractive and eye candy Karen Gillian brings a companion who is smart and not afraid to mix it up a bit. So far we have a companion who might not be all that stable mentally as she is going out on adventures with someone who was supposed to be an imaginary friend.  But as things went along we find out that isn’t true and she turns out to be a pretty good companion to Matt Smith’s Doctor. 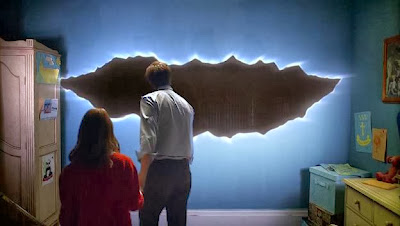 I liked Prisoner Zero.  Here you had an easy bad guy to fight a shape changing snake like creature that has escaped from a planetary prison from another planet. Prisoner Zero is being chased by the Atraxi.  The Atraxi was another cool type of alien that has one giant eye that just seemed to hang in midair.  The confrontation between the Doctor and the Atraxi on the rooftop was pretty classic scene.  How could you not get all fan boyish when the images of the past ten Doctors where shown and then the 11th step forward.  It was a defining classic moment for Matt Smith’s first story. 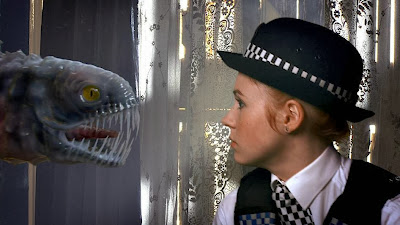 The part of the story that I liked the most was the scenes with the Doctor and little Amelia Pond. Those were pretty funny and touching if not just a tad sad. When he kept rejecting the foods and then settled on fish sticks and custard was truly a Doctor moment. Then investigating the crack in Amy’s bedroom and then seeing that big eye starring at you pretty scary spooky moment. You really had to feel sorry for her sitting out in the cold waiting for him to return. I found that sad but as we know it all worked out in the end.

For once and this is why the Eleventh Hour gets high praise is that we finally get a post regeneration story where the Doctor isn’t spending the entire episode lying in a bed and doing nothing. Or a Doctor walking around senseless and having trouble with his mind or memory. We have a post regeneration where the Doctor does something.  He saves the world in 20 minutes. Finally we have a story for a new Doctor that isn’t bogged down with personal trauma which we have seen way to often since it was first done back in 1981 in Castrovalva. 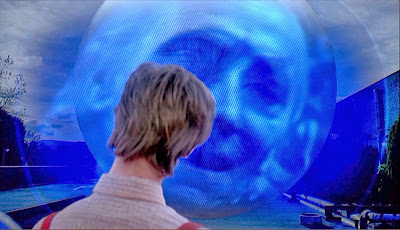 The Eleventh Hour gave us new opening credits, version of the theme and most of all a really cool looking new TARDIS. I really like what the inside of the TARDIS look liked. I do believe it is the best looking TARDIS set yet, well, until his new one debuts in The Snowmen. The new credits are pretty good. I like how it goes from cloudy vortex to fire vortex. The new theme song is not bad but at the time I thought that it will take time to get used to the new notes that were added which did not take long in reality.

For a first story Steven Moffat really packed a lot of stuff into it. The Eleventh Doctor started off running when he hit the ground literally. Plus watching this again it is funny seeing Rory knowing what he eventually ends up being considering he was a nervous looking wimpy person. Plus this story starts the overall arc about the mysterious crack that seems to be following The Doctor from here. So the Matt Smith era has started in a blaze of glory and we just have to wait and see what happens next.
Grade B+
Posted by DR5WHO at 10:30 AM