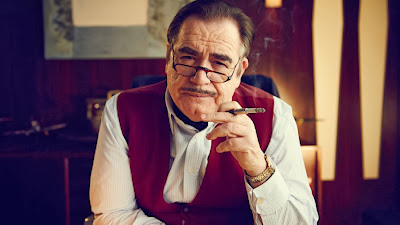 
Taking on the role of the BBC’s head of drama, Brian talks here about working at Television Centre in the 1960s and the colourful force of nature that was Sydney Newman.

Sydney Newman joined the BBC after a successful stint at ABC. Joining the corporation in 1962, his love of science fiction soon led to the creation of Doctor Who as the corporation looked to find a programme to fill a 25 minute tea-time slot.

“Sydney Newman was a formidable force in television,” explains Brian. “He started at ABC and kind of revolutionised drama. I first worked at the BBC in 1965 and did my first ever television play, ‘A Knight In Tarnished Armour’ and Sydney was there and I actually met him very briefly. You could always spot Sydney in the BBC Club because of his brightly coloured cravats and waistcoats. And his personality was the same!”

We first meet Newman in An Adventure In Space And Time as he strides in to TVC, ignoring the security guards calls to show his pass walking away with 'That’s not how we do it at the BBC, sir' ringing in his ears.

But as Brian explains, Sydney was very different to others at the Corporation.

“The BBC was very stuffy, says Brian. There were very good producers and directors, but it was all done by the board and delegation committee, and lots of memos. Sydney had a very different approach, a hands on approach, and I think that’s what made him unique. He brought a breath of fresh air.”

As well as being very passionate about his projects, Newman also had a knack for spotting a hit and delegating. He trusted those he appointed to do the work and gave them second chances. This is evident in ‘Space And Time’ which reveals that despite rumblings of criticisms about producer Verity Lambert’s overspending and hating the first try at the premiere episode of Doctor Who, he gave his team another shot.

“He had them reshoot the whole of the first episode of Doctor Who because he didn’t think it was quite right,” explains Brian. “I think he was very revolutionary, I think he really did create a standard.”

Trying to find a tea-time family show, Newman was clear there should be no ‘bug eyed monsters’. He hated the idea of the Daleks, but as we see in ‘Space And Time’ on seeing their success he was happy to admit he was wrong.

“Ultimately he was a populist,” explains Brian. “He believed in making drama popular. I think he took forward the original Director-General, Lord Reith’s philosophy in wanting to get the best possible drama to the maximum number of people.”

So does Brian see any similarities with Newman?

“I think there’s something very positive about Sydney and he was a force going against the norm of the day. In a sense, I’m very empathetic to him; he’s very much my kind of guy,” he concludes.