Doctor Who - Farewell Matt: The Vampires of Venice Doctor Who:
The Vampires of Venice
By Toby Whitehouse

“Funny how you can say something in your head and it sounds fine.”

Following the excellent two part Weeping Angel story we are given a story centered on vampires. Well aliens that are vampire like. The Vampires of Venice also brings back Amy’s fiancée Rory. This is the story in which It Rory will be joining the TARDIS crew as a regular before they kill him off and bring him back. 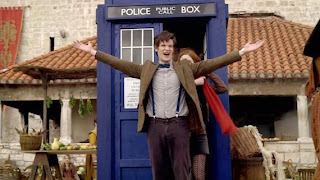 This is one of those stories that hardcore fans won’t like all that much but the casual fan will. It is mostly a story that is not the best written story but did have quite a few good moments to keep me entertained. For one I did like the pre credit sequence where the Doctor jumps out of the cake at Rory’s stag. Most notably the part where the Doctor says he thought he jumped out of the wrong cake again. The look on the faces of the partiers was priceless. 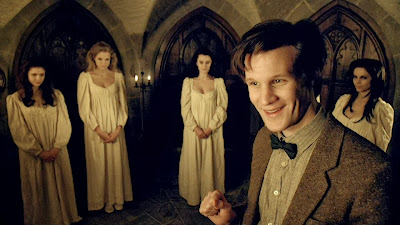 I did like the concept of the alien bug like creature that sucked the blood out of you. But in truthfulness this concept has been done before and a lot better. Like in 1980’s State of Decay which was a lot scary and a lot better vampire story. Not to say that The Vampires of Venice was awful which it wasn’t but it would have been nice to see something different.  Put it was entertaining and fun to watch especially watching The Doctors reaction to seeing the girls as vampires. Considering you could say that Doctor Who is trying to cash in on the recent vampire craze going on. You know with Twilight and Tru Blood. 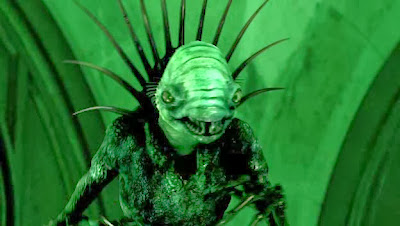 I like the addition of Rory to the TARDIS crew.  I think his addition works pretty well as Matt Smith has someone else to bounce off of. I liked how he stands up to the Doctor and accuses him of putting his companions in danger to impress him.  There is definitely good chemistry between the two actors and that makes watching the episode that more enjoyable. 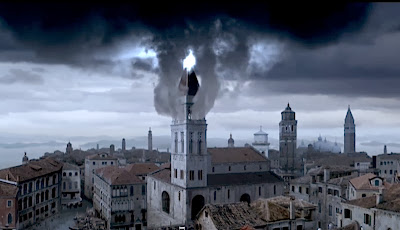 The Vampires of Venice, which was in actuality filmed in Croatia, was an enjoyable Doctor Who story that didn’t really add anything new or special to the series. It was just a fun one to watch and not one that bogs your mind down in complicated mumbo jumbo.
Grade B-
Posted by DR5WHO at 5:14 PM

Email ThisBlogThis!Share to TwitterShare to FacebookShare to Pinterest
Labels: 11th Doctor, doctor who, Matt Smith, The Vampires of Venice