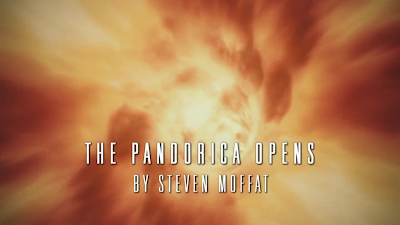 Doctor Who:
The Pandorica Opens/The Big Bang
By Steven Moffat


The Pandorica Opens was a good start to the season finale. If The Pandorica Opens doesn’t grab your interest right from the start then you should go and watch Stargate or one of those dumb vampire shows. Right from the start when the Van Gogh painting is revealed the excitement of a pretty good episode comes to fruition. Then we have River Song appearing again and meeting up with The Doctor at Stonehenge of all places and during the time of the Roman occupation of Great Britain. Then it gets better. They actually go underneath Stonehenge and find the Pandorica. That’s when things really get moving. The best Cyberman appearance in the new show happens underneath Stonehenge. How cool was it to see Amy getting attacked by a Cyberman head looking for a new occupant. It was neat to see the wires coming out of the neck and wrapping itself around Amy. This one scene in The Pandorica Opens makes the Cybermen scary again and relevant. This story was full of surprises like the return of Rory who in a bit of a swerve ends up being an Auton and appears to kill Amy. 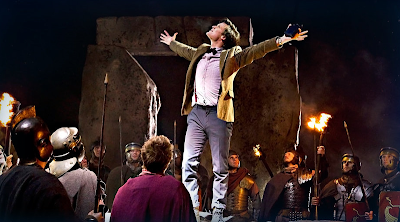 River Song is trapped inside when the TARDIS mysteriously blows up after River discovers why Amy is crucial to the 11th Doctor. This was a pretty good shocking element that I didn’t see coming. I thought it was pretty clever using The Doctors greatest enemies uniting together to trap the Doctor. They used images from Amy’s mind to get close to The Doctor. Now this is the part that really through me for a loop. Like most people I was expecting something to come out of the Pandorica. I never thought that The Doctor would be the one that gets put into the Pandorica. Now that was pretty clever turning things around and doing the unexpected. That’s what is different from this production crew from the last one. Everything was predictable and the conclusions turned out to be a bit disappointing. You know the good old reset button. 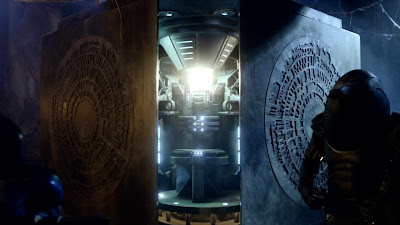 The Pandorica Opens sets up the next episode pretty well with a lot of questions and scenarios that makes me wanting to see The Big Bang right away. Like how is The Doctor going to get out of the Pandorica. Is Amy dead at the hands of Auton Rory? Will River Song escape the TARDIS? What really has me scratching my head will be the identity of the main villain. At the end of the Pandorica Opens we see Daleks, Cybermen, Sontarran, and a whole host of villains from The Doctors past. We know they are being played but we do not know by who or what. That’s what makes this story so good as to all the mystery surrounding it and hopefully gets resolved in a satisfying conclusion. 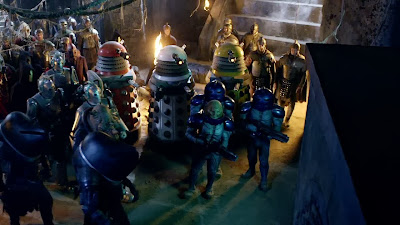 This takes us to the next part The Big Bang. I mean what a way to end the season and set things up for the next series. The Big Bang was a great story that made you wanting more. I mean we still do not know who the main bad guy is. Talk about keeping people talking well into the next year with speculations. Plus we are left wondering what will happen between The Doctor and River Song. I love when shows do stuff like that. It makes the anticipation for the next series at a high.

I loved how everything was resolved in a neat package. All questions from the season and last episode were resolved and they made sense. Unlike past season finales where you were scratching your head at the outcome or disappointed at how the conclusion came to be. That did not happen here. The Big Bang delivered the goods. I just thought the story was excellent. It had gripping scenes and touching moments. It had a blend of silliness but not too much as to not be too silly. Plus The Doctor almost dies yet again by a blast from a Dalek. Funny what they do to save his life.

The Big Bang had a lot of stuff going on. If you did not pay proper attention to it you would be lost. Especially since some of what on in this story will be appearing in The Time of The Doctor. Mostly due to the fact that it was fast paced at times which demanded your full attention. I know I’ll have to go back and see if I missed anything the first time around. I really liked the way that the 4 main characters in this story interacted. It felt like that they were acting together for years. One of the great things about the rebooted Doctor Who is the fact that they seem to get actors that work really well together and it is good to see it continue in the new series.

Steven Moffat is definitely the master of writing over drawn storylines that do not answer all the questions but leaves us waiting awhile before he ties everything up. As we see it is his big plan for the Matt Smith era of Doctor Who. Just look at this story and see how everything was explained and how it made complete sense most notably in the resolution on how to save The Doctor but yet we do not know who says “Silence Will Fall” or who blows the TARDIS up. It was brilliant. Still it is a bummer that we have to wait till Christmas 2013 to find out who is messing with The Doctor as I think the Christmas episode this year will shine a light on that and hopefully we see who blew the TARDIS up. Here is to a wonderful first season and a spectacular finale for the Matt Smith era where the stories questions will be answered.