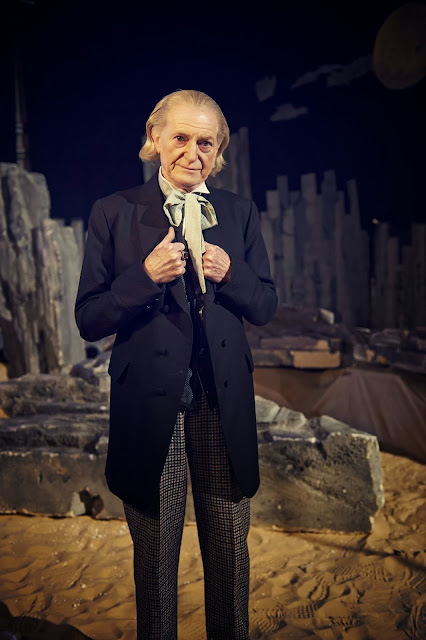 
Acclaimed actor David Bradley talks here about taking on the portrayal of an actor he greatly admired and transforming himself into the Doctor.

A popular screen star, well regarded by his peers, William Hartnell was born in St Pancras, London in 1908. He appeared in numerous plays, films and TV shows, often playing the ‘tough guy’ role as typified by his character in the comedy ‘The Army Game’, which ran from 1957 to 1961, just prior to Doctor Who.

When he was first approached, Hartnell was widely reported to have been unconvinced by the role of Doctor.

“It has to be said”, explains David, “after some initial reluctance to do something for children’s TV, I think he was quickly convinced that it was the right thing for him to do. He felt quite insecure about it as it was new territory for him, but once he started he embraced the whole idea of the part."

An Adventure In Space And Time tells the story behind the beginnings of Doctor Who and the team of personalities behind it. Known as a perfectionist, Hartnell was widely regarded as cantankerous by colleagues. But as David explains the script for ‘Space And Time’ reveals a full picture of Bill, including the good and the bad.

“I know he had a reputation at times for being cantankerous and rather difficult and one has to play that”, says David.

“It was clear from research and hearing his colleagues talk about him that he was a perfectionist. He demanded a lot of himself and he expected everyone around him to show the same level of commitment.”

Hartnell played the role from 1963 until 1966, creating the template for the character of the Doctor, which has since been played by 10 other actors. He embraced all that embodied the show, as David explains, “He was invited to school fetes in the full outfit and I thought how brilliant and touching that was. It’s clear that he absolutely loved it and found it very hard to let go. That’s an element that Mark Gatiss brings out in the script."

Deteriorating health led Hartnell to finally retire from the role, but as his illness worsened, so too did his relationship with the production team of Doctor Who.

“I think maybe when people joined the show later”, explains David, “different directors and different actors, if they showed a lack of commitment then it would upset him and he would let people know that’s how he felt. There are moments of sadness in ‘Space And Time’ where he becomes aware that he hasn’t got the strength to do it anymore.”

David grew up with the show (“I remember Hartnell, Troughton and Pertwee best”) and recently starred opposite current Doctor Matt Smith. Does he see any of Hartnell’s characteristics in Smith?
“I really admire him as a Doctor”, says David, “he’s got that curiosity and that slight eccentricity that the part requires, not in the same way as Bill Hartnell, but I think some of those characteristics have gone all the way through everyone that's played the Doctor.”

So how would David sum up his experience taking on one of TV’s most iconic roles?

“It’s been one of those great jobs and an experience I’ll always remember. We’re honouring something that’s been part of television history for 50 years and I hope I’ve done justice to an actor that I admire greatly," he concludes.