Doctor Who - Farewell Matt: Victory of the Daleks 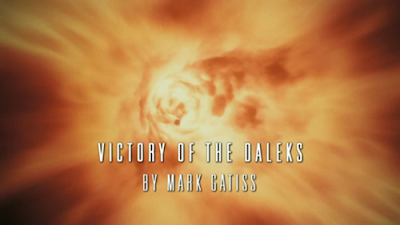 Doctor Who:
Victory of the Daleks
By Mark Gatiss


“You didn’t know them Amy. You’ve never seen them before and you should have done. You should.”


A story on paper that looked like it could have been a classic but falls short. The story looked promising. You have World War Two, Winston Churchill and the Daleks what could go wrong. Well how about British war planes flying in space with the aid of an antigravity saucer.  But it gets better that as the planes takes out the Dalek ship’s weapon that was focused on London. That was a really pretty hokey moment of the episode right there.  Well along with the Dalek android bomb that can destroy the Earth.  The character of Bracewell was kind of weak especially when he remembers a female acquaintance that helps defuse the bomb. 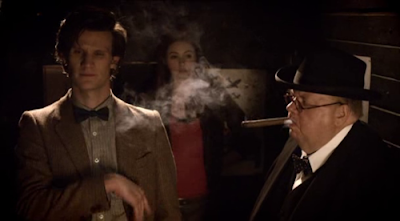 The introduction of the new style Daleks was pretty clever using pure Dalek DNA to create a new race of Daleks.  Actually they must have a share of stock with the toy company to come up with all those colored Daleks. You know like a bag of Skittles.  I think the new look Daleks looked pretty OK but really liked the old style and these new style just look so bulky and colorful. At this point when I originaly watched it I thought it would be good to give the Daleks a rest as I’m tired of seeing them every season and sometimes it is good to give something a rest and bring them back better than ever.

I did start off enjoying this story before the stuff mentioned above happened. I truly got a feel of Matt Smiths Doctor with his confrontation with the Daleks on the ship.  I liked how he used the Jammie Dodger to bluff the Daleks into thinking it was a self-destruct button. The interaction with Winston Churchill was pretty good also as we have only seen encounters with Churchill in print so it was good to see the interaction on the screen for once.

The Matt Smith and Karen Gillian pairing seem to be working out pretty well and more mystery seems to be in the air around the pair. Since she didn’t know who the Daleks were it gives the Doctor something else to worry about besides the crack that seems to be following them. She did have a good moment as Amy was the one eventually that got Bracewell to stop the bomb going off.

Victory of the Daleks was a disappointing story that started off promising but ended up having stupid moments and just didn’t quite click. It just was really unbelievable especially for Doctor Who especially having the planes flying around in outer space. Sorry Mark Gatiss but you flopped with this one.

Email ThisBlogThis!Share to TwitterShare to FacebookShare to Pinterest
Labels: 11th Doctor, daleks, doctor who, Matt Smith, Victory of the Daleks