Doctor Who 50th Anniversary: What Doctor Who Means To Me By @Paul_Bowler 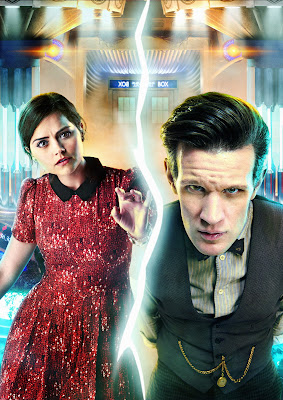 What Doctor Who Means To Me

Well, here we are, the 50th Anniversary of Doctor Who is almost here. As I write this on a cold rainy Friday evening, I’m looking forward to the Doctor Who clip that will feature in Children in Need tonight. Just like everyone else I’ve been tweeting today I’m really excited about The Day of the Doctor, especially after seeing yesterdays special min-episode: The Night of the Doctor, were Paul McGann returned as the eighth Doctor and transformed into John Hurt - The War Doctor!!

So, for this special celebratory piece I’ve been asked to say what Doctor Who means to me. Well, there’s a challenge! I could go on for pages and pages about how much I love Doctor Who, seriously, I could fill a TARDIS with memories and anecdotes. Well, that in itself might make a good feature or article for another time perhaps, who knows, but for now I will concentrate on exactly what Doctor Who really means to me. 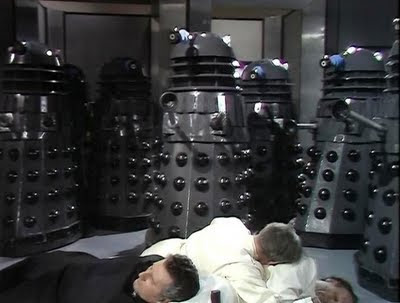 For me Doctor Who has been a constant voyage of discovery, for as long as I can remember, pestering everyone about those old episodes of Doctor Who I’d vaguely heard about or seen pictures of in Doctor Who Magazine. Oh my, and what tales of discovery they were: of Daleks invading London, Cybermen in the sewers, giant spiders that sang “Ohm Buddy Buddy” and chased the Doctor and a princess around a castle (ok, now I know that one has really got you scratching your head, it’s a funny story, and I will tell you it one day, promise), creepy Egyptian Mummies stalking the woods, and Leela saving the Doctor from a glowing skull. As the stories and reality begin to collide somewhere in time as we drift through the vortex, Davros’ cobwebbed hand came back to life, Romana left and took K9 with her, the Cybermen returned as Adric went splat, there was a Doctor Who team up with EVERYONE in it, and finally the man in a colourful coat became someone much darker, who was very good at chess and travelled with a girl who could beat up Daleks…

The TV Movie that never quite turned out to be what everyone hoped it would be led to even more books and more stories, with videos being overtaken by DVD’s as each piece of the past fell into place like segments of the Key to Time, seeking out those old Target books, all the while with hope for the future, and a time where one day, one day, yes one day it would come back… and you know what, it did! Russell T Davies resurrected Doctor Who and a whole new generation of fans became enchanted by the magical; wonderful world of a mad man in a blue box. 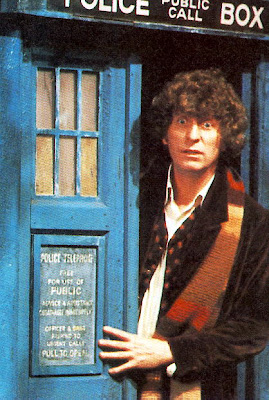 My favourite Doctor is Tom Baker, his marvellous bohemian incarnation of the fourth Doctor is just brilliant, but in many ways I also feel that all of the Doctor’s are “my” Doctor, as my journey in discovering them all has been just as haphazard as the Doctor’s own time travelling adventures. This article was written after a day spent having lunch with old friends I hadn’t seen for a very long time, so after good food, plenty of laughter, and a bottle or two of wine later here I am writing this. Indeed, after this is written I will come back and tell you how I spent the latter part of the evening tweeting one of my old Cult Den colleagues, all the way over in South Africa, about all the excitement for the 50th Anniversary. Yes, it was a very good day indeed, filled with good times, many happy memories, and all interwoven within this joyous, magical tapestry of Doctor Who’s 50th Anniversary.

So, what does Doctor Who really mean to me? Well, two things constantly spring to mind as I kept thinking about writing this. Firstly, a few years ago, while decorating, an old wardrobe had to be moved and lo and behold, as it was emptied of junk, I found a bin bag that had been gathering dust at the back, and I was thrilled to find it contained some of my old Dr Who Target books! There were even a few Agatha Christie books as well, which I also loved to read, and still do. I honestly thought this lot had been lost during a move, so finding them again like that was brilliant!

Having watched the final episode of Poirot (Curtain) this week, and as I thought about this article, The Day of the Doctor, and everything else, it made me think how similar Doctor Who and Poirot are in some respects. They each arrive in the middle of a mystery and then solve said mystery with the power of their minds, both have had many faces, they can also be manipulative and charming in equal measure but seldom, if ever, use violence unless it is to defeat a great evil. I know you may be thinking what the hell is Paul on about here? Well, reading has always been something I’ve enjoyed, books, comics, history, astronomy, but above all else it has been Agatha Christie’s novels that engage my “little grey cells” and Doctor Who that fires my imagination.

Secondly, and perhaps just as importantly, is the Impossible Astronaut. Yes, that episode means a lot to me. I was never that keen on the Doctor travelling alone, so after Donna left, my interest in new Doctor Who at the time did waver, yes, shocking as that may sound, but its true. I still tuned in, or recorded those specials, yet even when Matt Smith’s first season debuted, only the stories with the Daleks and the Weeping Angles really appealed to me. 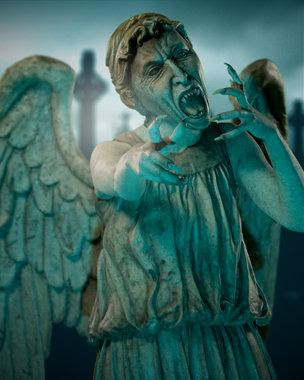 But then, after reading about Twitter in Doctor Who Magazine prior to watching the Impossible Astronaut that Saturday, that gloriously warm sunny weekend, I joined Twitter and started chatting to other fans who had just watched the episode. I discovered a whole community spirit around the show that I’d never really experienced before, chatting to people here, there, and all around the world, about Doctor Who episodes old and new, comics, novels, audio adventures, and now even newly discovered episodes on iTunes! What a find eh? The Enemy of the World and The Web of Fear, it still hasn’t quite sunk in, that we can enjoy these wonderful episodes again. Terror of the Zygons, my favourite Doctor Who story is now on DVD as well, with its missing scene from episode one beautifully restored! The Reign of Terror, The Ice Warriors, and The 10th Planet are also available, with their missing episodes replaced by some superb animation. Very soon we will be taking a nostalgic look at the creation of Doctor Who itself, in An Adventure in Space and Time by the brilliant Mark Gatiss, and the excitement will build as we finally reach Saturday the 23rd Nov, and settle down to watch The Day of the Doctor, and what’s more nearly all of us will be able to watch it together at the same time, either on TV or at the cinema. 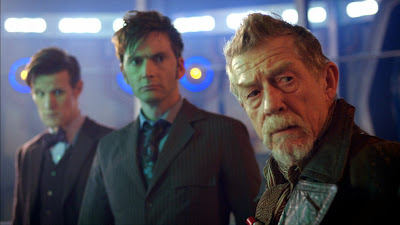 So, as I leave you now to watch Children In Need, have a cuppa tea, and read some more of the fantastic 50th Anniversary Edition of Doctor Who magazine, what I hear you say, does Doctor Who really mean to me? Fun, community, and friendship, yes, that about sums it up for me. I’ve gotten to know so many fantastic people since The Impossible Astronaut was first shown, fans who love the show just as much as I do, perhaps even more so, many of whom, I’m happy to say, have become good friends. So, enjoy this moment, this very special time, think of all the happy times and places we have shared, and all the wonderful stories and adventures still to come…
Posted by DR5WHO at 2:52 PM