Doctor Who - Steven Moffat On "The Day of The Doctor" 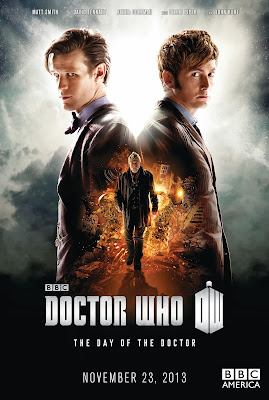 What is it like being the writer for the Doctor Who 50th special?
Since I was a little boy, the idea of writing a Doctor Who story at all was remarkable enough to me. But writing the 50th special was exciting and terrifying - everything that showbiz should be.

So where did the story for ‘The Day Of The Doctor’ come from?
I didn’t want this to just be a celebration of 50 years of the past. I wanted it to be a celebration of the mythology and legend of the Doctor and all that entailed.
This should be the first step on the next journey, guaranteeing the 100th anniversary. The story focuses on the most important thing that ever happened to the Doctor. We very rarely do that in Doctor Who as it’s usually about the people the Doctor meets or the companions that travel with him.
This time it’s different.


The Day Of The Doctor welcomes back the shape-shifting Zygons, a monster we haven’t seen since the 1970s. Why did you decide they were the ones to bring back?
The Zygons, without question, are a design classic. They are superb - brilliant from the voice, to the appearance. Essentially, we’ve resurrected exactly the same Zygon as Tom Baker fought back in the 70s. They are beautiful, and it’ll show that the special looks forward to the future of Doctor Who and also celebrates the legend.

At the end of the last series we were introduced to John Hurt as The Doctor. What does John bring to the role and can you tell us anything about his Doctor?
With John Hurt we have serious acting royalty and that was the intent of John’s character. John is one of the most distinguished film stars of British origin, one of the most distinguished actors this country has produced and has now become part of Doctor Who mythology.

The Day Of The Doctor will be the first time we see Doctor Who in proper 3D. Did you write the script with 3D in mind?
My first impulse was if we’re going to do 3D, it had to be part of the plot. We actually have to make 3D part of the story and if at all possible, to try and make 3D a bit scary. I wouldn’t say it’s in every scene, but there is an element of the show that exploits the fact of 3D.

The 50th special will mark the return of David Tennant to the role of the Tenth Doctor, starring opposite the Eleventh, Matt Smith. How was it having two Doctors on set?
It was eye twisting at times. You don’t quite realise how these two men have become hard wired into your brain as the Doctor. Matt and David got on so well and their interaction on screen is a sublime double act. Matt said to me, “It’s a bit like Laurel and Laurel. It’s like Hardy didn’t turn up”. They are absolutely great together. Sometimes very, very, different - other times, in moments they choose together, they are exactly the same.

And finally, where will you be watching the episode on 23 November?
I’ve got two impulses. One is to watch it at home with my friends, particularly friends who made the show. My other impulse is to go out and join the party. But it’s a difficult one. When Matt and I watched the ‘Eleventh Hour’, we watched it many times before it went out. Then came the fateful day, the 3rd of April, 2010. Matt came round to my house, my parents and his parents were there to watch the episode go out and have our future decided. Everyone sat down, but Matt and I couldn’t stay in the room. So I might be watching it peering round my kitchen door with Matt.

Email ThisBlogThis!Share to TwitterShare to FacebookShare to Pinterest
Labels: doctor who, Doctor Who 50th Anniversary, Steven Moffat, The Day of the Doctor