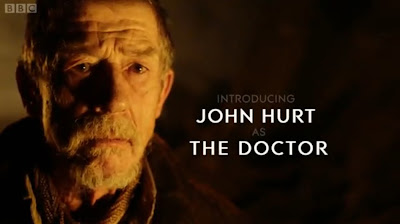 The BBC has revealed the title of the anniversary special as "The Day of the Doctor".  The special stars Matt Smith and David Tennant as the Doctors and will run around 75 minutes.

BBC 2 will air the docudrama An Adventure in Space and Time as well as a show about the science of Doctor Who hosted by Professor Brian Cox.  The Culture Show will have special called "Me, You and Doctor Who" which will look at the cultural impact of Doctor Who.

BBC 4 will be airing "The Unearthly Child" in a newly restored format.

BBC Radio 2 will have a 90 minute documentary with new interviews.

BBC 3 will have several yet announced commissions related to Doctor Who......

Meanwhile a protest was spotted outside BBC headquarters about the lack of classic Doctors in the new special.  Among the protests were Sylvester McCoy (7), Colin Baker (6) and Peter Davison (5). Theories that this is a promotion of some sort seem likely!! 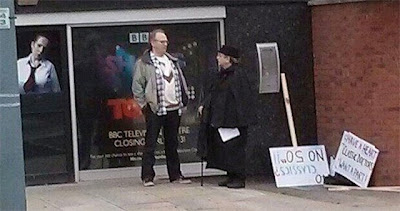 Email ThisBlogThis!Share to TwitterShare to FacebookShare to Pinterest
Labels: An Adventure In Space and Time, doctor who, Doctor Who 50th Anniversary, The Day of the Doctor