Synopsis For Doctor Who - Daleks Among Us 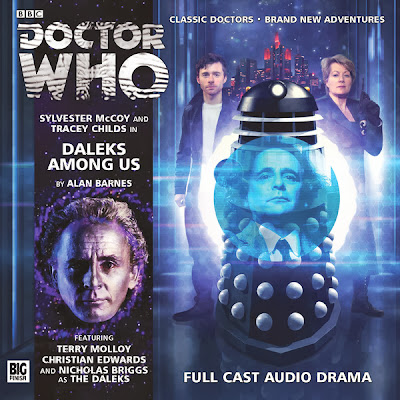 The second Doctor Who Main Range release features the 7th Doctor.  Last month it was Sontarans this month it is Daleks and their creator Davros.  This is ends the mini trilogy for the 7th Doctor and you can order it from the Big Finish website.
http://www.bigfinish.com/releases/v/daleks-among-us-715

REMINDER: TO ALL CITIZENS

Twenty years ago, the Daleks did not invade Azimuth. There was no war. There were no death camps. A man named ‘the Doctor’ did not help liberate Azimuth.

UPDATE: TO ALL CITIZENS

A strange blue box has not appeared in Monument Plaza. Off-worlders named ‘the Doctor’, ‘Elizabeth Klein’ and ‘Will Arrowsmith’ are not at large in the city. For your own safety, should you not see any of the above, report at once to the Department of Re-education, Azimuth Central.