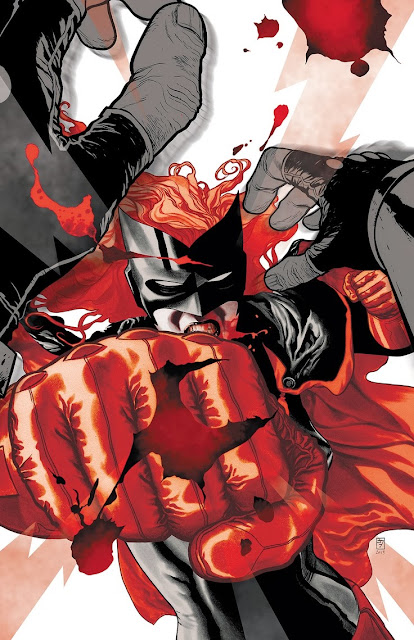 DC Comics has done it again.  Their editorial interference and messing with creators plans and asking them to do 11th hour changes on their books has caused one of the best duos on one of the highly acclaimed books to quit.  JH Williams III and W. Haden Blackman last issue of Batwoman will be issue 26 and the main sticking point is about DC not allowing Batwoman marry her girlfriend Maggie Sawyer.  There were more problems like not allowing them to tell Killer Crocs origin among other things that they had plotted a year in advance.  Williams III responded on Twitter last night that the reason to leave had nothing to do with it being anti - gay as Batwoman is a lesbian but more on a marriage thing as DC doesn't want its characters married hence why the dissolved the Superman Lois Lane marriage during the reboot.   This is unfortunate news and unfortunately something that has happened a lot at DC with creators quitting the company over DC's editorial interference.  Wonder who will be the next to leave.  Here is the statement from JH Williams III and W. Haden Blackman.

From the moment DC asked us to write Batwoman — a dream project for both of us — we were committed to the unofficial tagline “No Status Quo.” We felt that the series and characters should always be moving forward, to keep changing and evolving. In order to live up to our mantra and ensure that each arc took Batwoman in new directions, we carefully planned plotlines and story beats for at least the first five arcs well before we ever wrote a single issue. We’ve been executing on that plan ever since, making changes whenever we’ve come up with a better idea, but in general remaining consistent to our core vision.

Unfortunately, in recent months, DC has asked us to alter or completely discard many long-standing storylines in ways that we feel compromise the character and the series. We were told to ditch plans for Killer Croc’s origins; forced to drastically alter the original ending of our current arc, which would have defined Batwoman’s heroic future in bold new ways; and, most crushingly, prohibited from ever showing Kate and Maggie actually getting married. All of these editorial decisions came at the last minute, and always after a year or more of planning and plotting on our end.

We’ve always understood that, as much as we love the character, Batwoman ultimately belongs to DC. However, the eleventh-hour nature of these changes left us frustrated and angry — because they prevent us from telling the best stories we can. So, after a lot of soul-searching, we’ve decided to leave the book after Issue 26.

We’re both heartbroken over leaving, but we feel strongly that you all deserve stories that push the character and the series forward. We can’t reliably do our best work if our plans are scrapped at the last minute, so we’re stepping aside. We are committed to bringing our run to a satisfying conclusion and we think that Issue 26 will leave a lasting impression.

We are extremely thankful for the opportunity to work on Batwoman. It’s been one of the most challenging and rewarding projects of our careers. We’ll always be grateful to everyone who helped us realize 26 issues: Mike Siglain, who brought us onto the project originally; Greg Rucka for inspirationally setting the stage; our amazing artists Amy Reeder, Trevor McCarthy, Pere Perez, Rob Hunter, Walden Wong, Sandu Florea, Richard Friend, Francesco Francavilla, Guy Major, Dave Stewart, and Todd Klein; Larry Ganem, for listening in tough times; and editors Mike Marts, Harvey Richards, Rickey Purdin, and Darren Shan.

And most of all, a huge thank you to everyone who read the book. Hearing your voices, your reactions, your enthusiasm every month was such a joy, so humbling, so rewarding. You guys rock! Because so many of you embraced the series, we were able to complete four arcs, and your passion for Batwoman encouraged us to push ourselves to do our best work with each and every issue.
Thank you for loving Batwoman as much as we do.

Source: CBR and The Beat