Doctor Who - Scream of the Shalka DVD Review 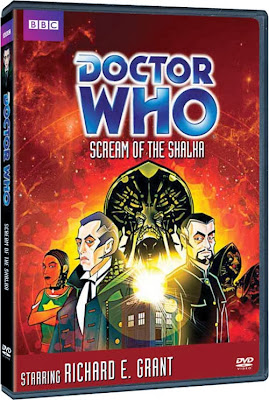 Way back in 2003 there were two Doctor Who things going on.  Firstly and the one most people remember is the news that Doctor Who will be returning to television being helmed by Russell T. Davies in a 13 episode series.  What a way to celebrate the 40th anniversary of Doctor Who with the news that the show was returning and would begin filming sometime in 2004.  The other was the BBCi planned Doctor Who series of webisodes featuring a Ninth Doctor.  Scream of the Shalka was supposed to be the beginning of a new series and was all set to go but well a certain piece of news derailed it and Scream of Shalka would end up being a one shot and well it was new Doctor Who for the 40th but just not what we really wanted but that would come in a few years. 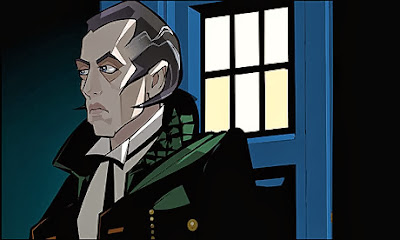 Scream of the Shalka debuted on 13th November and ran to December 18th running for 6 episodes.  It was released to coincide with the 40th and be a continuation of of the series which ended in 1989.  This DVD release collects the six episodes and the usual extras that we generally get with Doctor Who DVD releases.   There were some pretty interesting extras that dealt with the making of Shalka  the one I liked was “Keeping on Screaming” which was the best extra to watch as you get a sense of how this story became to fruition.  “Interweb of Fear” was a pretty good hstory of the BBC Doctor Who website through the years and most notably the input from Russell T. Davies.  It was pretty interesting to see Doctor Who’s involvement with the internet especially when the show was off the air that makes this documentary a must watch. 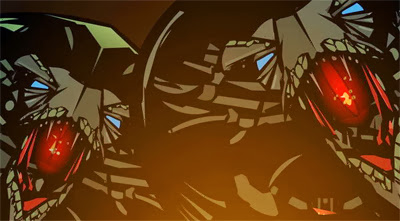 Now the story of Scream of the Shalka isn’t all that good.  In fact I find it to be quite boring and just does not have the feel of a Doctor Who story.  The plot is interesting having an alien race control the humans by using a sonic scream. But after awhile the scream just got annoying.  The problem I have if the Shalka was in the ground why couldn’t the people just get in a car and drive away.  It seemed simple enough when it was suggested by The Doctor.  If they were attracted by noise couldn’t you have made a distraction and then make your get away.  The story to me just seemed too choppy and didn’t really explain much. Like why was The Doctor traveling with a robot Master. Why was he yelling at the Time Lords when he arrived on Earth and so on. 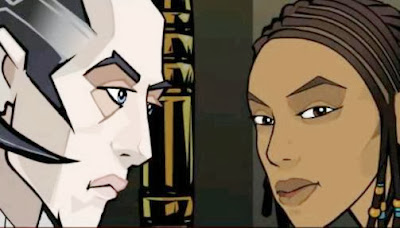 Scream of the Shalka is a pretty boring story and well the performances are not up to snuff.  Richard E. Grant as The Doctor just does not work and he just does not win me over.   In fact his Doctor is really grumpy and not that likeable and pretty rude.  He tries to be Doctorish with the eccentric way he acts but it just does not seem convincing.  Sometimes I wonder if he is just reading the script and not really trying.  He is a lot better as The Great Intelligence in Series 7 of Doctor Who and you can tell he is into that part.  But while he is doing Shalka it just doesn’t come across all that good at all and is a really disappointing performance.  Derek Jacobi is alright as the robot Master and I often wonder why The Doctor is traveling with a robot Master.  He doesn’t really add anything to the story and just seems to be a novelty rather than anything important.  But I did find it funny that Derek Jacobi was the voice of The Master and then would play him proper in Utopia in 2007. 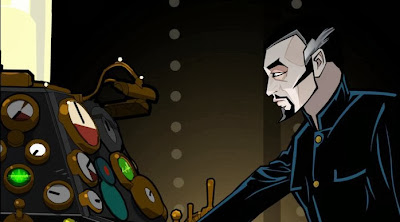 Email ThisBlogThis!Share to TwitterShare to FacebookShare to Pinterest
Labels: doctor who, Paul Cornell, Richard E. Grant, Scream of the Shalka