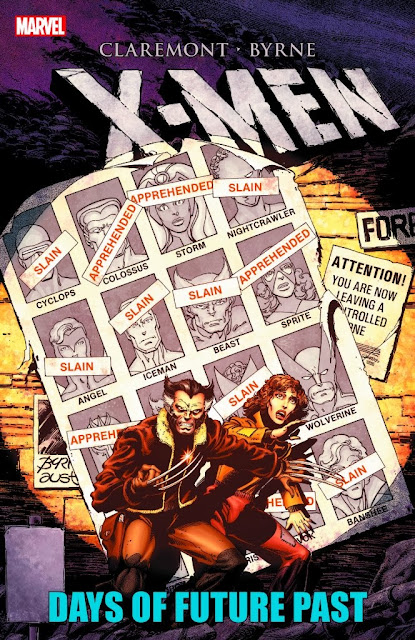 With the prospect of the next X-men movie being the classic story (that’s what I’ve been told by those X – Men experts) so I went out and bought the trade paperback in which this story is collected and thought I would give it a read to get a hint of what the movie would be about.    The trade collects Uncanny X-Men 138 – 143 and Annual 4 of the original run of the book that was published in 1980 and 1981.  I really enjoy 80’s comics as that era is a favorite of mine and there are a lot of good stories and well it was a time where the big two did not reboot series and start everything over every so many years.

This collection is written by long time X-Men scribe Chris Claremont and is responsible for many stories that have lasted the test of time like the Dark Phoenix storyline and of course Days of Future Past.  On art duties is one of my favorite artists John Byrne who I became a fan of during his run on Fantastic Four from the mid 80’s to early 90’s. 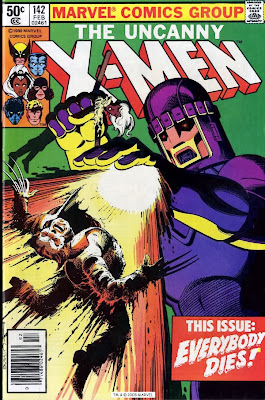 The stories that are included in this collection along with Days of Future Past are for the most part pretty entertaining and fun to read.  They are not all that complex and have a good mix of dialog and action.  One of the main complaints that I have with comic books today is that there is too much dialog and not enough beating up the bad guys.  The books get mired in a dragged out story that is mainly dialog and that gets boring quick.  What I liked about these stories from the 80’s is that the plot wasn’t complex.  It mainly was heroes stop the bad guy.

Uncanny X –Men Annual 4 dealt with a story about Nightcrawlers past.  It guest starred Dr. Strange.  It dealt with the occult and the X – Men had to go to Hell to save Nightcrawler who is put on trial sort of for killing his brother as he was trying to stop him from killing again.  The story overall wasn’t bad and gave me some insight into Nightcrawlers character which I hadn’t known before as I am only a novice when it comes to the X – Men and not an expert on their history.

The other stories which I enjoyed dealt with Wolverine and Nightcrawler heading up to Canada to fix some of Wolverines government problems and on the way they visit his old friends in Alpha Flight. There they are menaced by the return of Wendigo who is in fact a giant big foot type of creature who is like the Hulk cause his human self does not know what is going on.  This story was pretty good as it was a throw them down all out brawl between Wolverine and Wendigo.

No, Days of Future Past was not the story I was expecting.  For one it is only in two issues of Uncanny X – Men (141 -142) and it is centered on Kitty Pryde.   You have the future events where mutants are hunted and killed by the Sentinels in the year 2013.  The future Kitty has a plan to go back in time and inhabit young Kitty’s body and try to stop the events that caused here future.   When she gets to the past at the cost of some of her friends life we end up watching a big battle in the Senate against the new version of the Brotherhood of Evil Mutants who want to kill Senator Kelly. When I saw a big battle the second half of the story is just that a big battle in present day.  We do see a few more of the future X – Men fighting the Sentinels in the Baxter Building to no avail and eventually getting exterminated in the process but I felt that part could have been done earlier when future Kitty was trying to get to the past.  It did not really dampen the story but wasn’t really needed as we could have had flashes to the future showing them showing concern for Kitty’s mission

Overall the story was pretty good and pretty simple to follow but there really wasn’t much to it and it makes me wonder how they will make this into a movie.  Well for one they will be doing it different with different characters but for the most part the main story is just a big battle. It is too bad that the story didn’t take place completely in the future more as that part was truly interesting and probably be the best part of the movie.   But who knows the movie most likely be loosely based on the comic book story anyway.

What was pretty good about these stories is the introduction of Kitty Pryde, who will be played by Ellen Page in the movie, and how she became a member of the X – Men.  Since she will be a central figure in the new movie it was pretty good to get a feeling for what her character is about at least in the early parts of X – Men history.  Most notably in the last story of the book in which Kitty is left alone at the school and has to fight off a monster that wants to kill her while the others are away.   It was good to see how they developed her and the story Demon was a pretty good story to finish up this collection of X – Men stories. Days of Future Past was a pretty good and enjoyable read and if you want a head start on the movie give it a go.
Posted by DR5WHO at 7:06 PM

Email ThisBlogThis!Share to TwitterShare to FacebookShare to Pinterest
Labels: X-Men, X-Men Days of Future Past