BBC America Home Entertainment has released some details on their Doctor Who DVD releases leading up to the 50th Anniversary.  Unlike in the UK the North America Tenth Planet release has not been moved up to October.  The Tenth Planet and Terror of the Zygons are ones fans have been clamoring for and they finally get the DVD treatment. 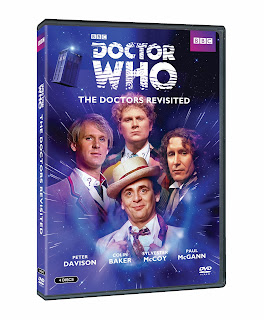 Street Date: October1, 2013
Suggested Retail Price: DVD $39.98 ($49.98 in Canada)
Length: Approx. 448 mins + bonus material/ 4- disc set
BBC Home Entertainment continues its celebration of the 50th anniversary of Doctor Who by looking back at the actors who have portrayed the series’ iconic hero over its historic past. The years 1981-1996 saw four new actors portray the Doctor: Peter Davison (1981-83), Colin Baker (1984-86), Sylvester McCoy (1987-89) and Paul McGann (1996). This collection features a retrospective on each actor and their tenure as the Doctor, followed by one full story for each Doctor, including Earthshock, Vengeance on Varos, Remembrance of the Daleks, and Doctor Who: The Movie, presented in both widescreen, feature-length version and in its episodic, original format. Bonus features include a specially recorded introduction to each classic story by executive producer Steven Moffat. The set also includes an exclusive set of 4 fridge magnets, one for each Doctor.

DOCTOR WHO: THE TERROR OF THE ZYGONS

Street Date: October 8, 2013
Suggested Retail Price: DVD $34.98 ($43.98 in Canada)
Length: Approx. 98 mins + bonus material / 2-disc set
Returning to Earth, the Fourth Doctor (Tom Baker), Sarah Jane (Elisabeth Sladen) and Harry (Ian Marter) arrive in the Scottish Highlands to investigate the mysterious destruction of several oil rigs in the North Sea. Local superstition speaks of a deadly threat that lurks in the mists of Tulloch Moor, but the truth is even more disturbing: the legendary Loch Ness monster is a terrifying cyborg beast which is controlled by the Zygons, an advanced alien race who are desperate to ensure their own survival, at any cost. This digitally re-mastered edition of the Doctor Who classic includes an extended cut of Episode 1; Audio Commentary with producer Philip Hinchcliffe, writer Robert Banks Stewart, production unit manager George Gallaccio, make-up designer Sylvia James and special sounds designer Dick Mills; Scotch Mist in Sussex, a making-of featurette; and much more.

DOCTOR WHO: THE TENTH PLANET
Street Date: November 19, 2013
Suggested Retail Price: DVD $34.98 ($43.98 in Canada)
Length: Approx. 93 mins + bonus materials/ 2-disc set
The TARDIS arrives in December 1986 at a South Pole Space Tracking station where the personnel, under the command of General Cutler, are engaged in trying to talk down a manned space capsule that is experiencing difficulty. The First Doctor (William Hartnell) realizes that the problem stems from the gravitational pull of another planet that has entered the solar system and is now heading for Earth. His words are borne out when the base is invaded by a force of alien Cybermen. The Cybermen's world, Mondas, is draining energy from Earth – once its 'twin planet' - and the situation will soon become critical. This digitally re-mastered edition of the Doctor Who classic includes Audio Commentary with actors Anneke Wills, Christopher Matthews, Earl Cameron, Alan White, Donald Van Der Maaten, Christopher Dunham and designer Peter Kindred; Frozen Out, a making-of featurette; an interview with William Hartnell; and more.
Posted by DR5WHO at 4:52 PM

Email ThisBlogThis!Share to TwitterShare to FacebookShare to Pinterest
Labels: 2013 Christmas Special, doctor who, Doctor Who DVD