Doctor Who: Destiny Of The Doctor - Babblesphere 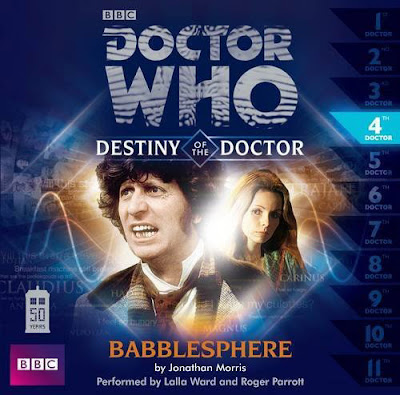 Doctor Who:
Destiny Of The Doctor –
Babblesphere
By Jonathan Morris
Performed By Lalla Ward

The Doctor and the second Romana arrive on the volcanic world of Hephastos which is home to lots of people who thrive in the world of art.  Unfortunately the inhabitants of Hephastos let their world go to pot and allowed it to get run down and look junky almost like a dump.  The Doctor discovers that they are enslaved by the babble network which occupies their every moment and every thought is shared with everyone else on Hephastos no matter how trivial it is and privacy is deemed a crime.  With the population being killed The Doctor and Romana suspect a higher evil intelligence is at work and prepare to free the people of Hephastos from its control.

Babblesphere was a fun story even if it was all over the place in parts.  I have been enjoying the Destiny of the Doctors series and the Fourth Doctor entry continues that streak of good stories.  Lalla Ward does a fantastic job returning to the role of Romana and impersonating Tom Baker.  It was like stepping back to the late 70’s as Lalla Ward did not miss a beat and it seemed like she was still in the part of Romana.

Babblesphere even though it was a good story it did not really captivate me and is so far my least favorite of the series.  This is unfair to Babblesphere really since the previous three were just super and if this was a standalone story not part of an arc it would be really excellent.  But judging it against the other three stories it falls a tad short.  I liked the premise of the story with the whole Babblesphere and what The Doctor eventual came up with to stop it.  Babblesphere while a fun story and it was nice to hear Lalla Ward again it just did not live up to the rest of the arc but it was still pretty good and worth a listen.
Grade B -