Doctor Who: Phantoms of the Deep Review 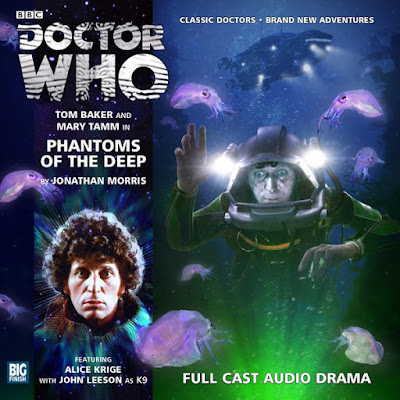 Doctor Who:
Phantoms Of The Deep
By Jonathan Morris
Starring Tom Baker, Mary Tamm
& John Leeson
The TARDIS lands underwater in fact in one of the deepest parts of the ocean called the Mariana Trench.  The TARDIS is soon picked up by an exploration crew and put aboard their ship.  There seems to something amiss down in the murky depths of the ocean as The Doctor discovers a super intelligent squid and a threat that to the human race.  It’s up to The Doctor and Romana to save the Earth once again but this time it might be a tad bit harder at the ocean floor.

I really enjoyed Phantoms of the Deep.  It was a different take on Doctor Who in which it took place underwater.  Doctor Who doesn’t regularly do stories based in the depths of the ocean. There are a few but they mostly take place in a seabase or submarine like in Cold War but this time The Doctor actually does some exploring in a diving suit.

I also liked the mystery surrounding this story.  It was fun trying to deduce what was going on and when they find the officer from World War 2 it just through everything for a loop.  There were also some good K-9 moments especially when he was taken over and went bad.  It was strange hearing K-9 being a villain for the short time he was in this story but it was good to hear John Leeson in that role instead of the same old K-9 banter.

Tom Baker and Mary Tamm gave their usual good performances. It is hard to believe that Tom Baker is 80 years old as he sounds just like he did when I was watching him back when I was a child oh so many years ago.  It is like he never left the role as Tom Baker really made this story that much more enjoyable.  If you want to try the Tom Baker Big Finish stories The Phantoms of the Deep would be a good one to try out as it is a really good story and it has that classic Who feel to it.
Grade B +

Email ThisBlogThis!Share to TwitterShare to FacebookShare to Pinterest
Labels: 4th Doctor, big finish, doctor who, Phantoms of the Deep