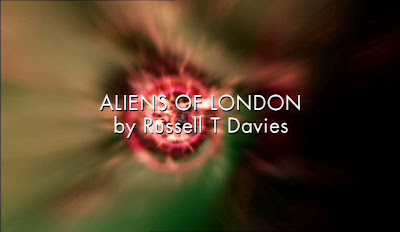 Doctor Who:
Aliens of London/World War 3
By Russell T. Davies

“If aliens fake an alien crash and an alien pilot, what do they get? Us. They get us. It's not a diversion, it's a trap.”

The Doctor returns Rose home in which he believes she has been gone for 12 hours which it turns out to be 12 months instead and it caused quite the furor.  Jackie was livid as she thought Rose was kidnapped and even went as far as accusing Mickey of murdering her.  Needless to say this was not the homecoming that Rose had expected and it was another goof by The Doctor that resulted in all this. 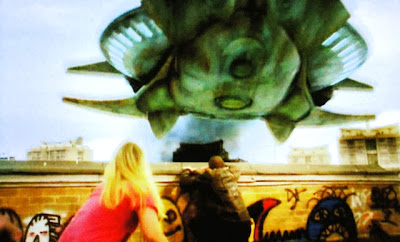 Then all of a sudden an alien ship crashed to Earth hitting Big Ben before crashing into the Thames.  This has gotten The Doctor’s spirits up as he now has something to investigate and to get away from the domestics.  What he finds is a pig. A normal pig that someone has augmented his mind to make people think it is an alien. 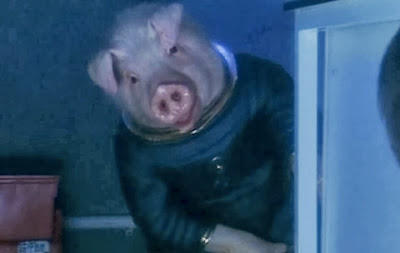 The Doctor arrival in London hasn’t gone unnoticed as a phone call from Jackie has gotten the attention of those that are the real culprits.  Soon The Doctor and Rose are picked up and brought to Downing Street to help with the alien emergency.  But it turns out to be a trap as The Doctor discovers that the Slitheen have taken over the government and want to make the worlds powers use their nuclear weapons to destroy the Earth so they can sell it for a profit. So its up to The Doctor to once again save the Earth.

Aliens of London/World War 3 isn’t a particular favorite of mine.   I just could not find the Slitheen all that threatening and for an alien they are pretty weak.  I mean they are known more for farting noises than being threatening or scary.   In fact they are more suitable for a children’s show and actually work really well on The Sarah Jane Adventures than they did in Doctor Who.  I’m guessing the producers were hoping they would catch on as a new baddie but the Slitheen did not just work well.

I really liked the part of what happens when a companion goes off with The Doctor and what happens to those they leave behind. This was pretty interesting as this has never been explored before in Doctor Who.   It is a different light we get to see as Jackie is all concerned and worried and the same with Mickey as he is dealing with being accused of murder.  What is troubling is at some point during all this you get the feeling that Rose doesn’t care all too much about the ramifications later on when she leaves with The Doctor again.

The story is pretty simple and just doesn’t get do much for me.  Ok. I just don’t like it and that whole running around Downing Street seemed too much like Scooby Doo to me.   The Doctor locked up in the meeting room and doing everything on the phone telling Mickey what to do was ok and gave the extra regulars something to do but it just seemed a tad bit boring to me.  One of the good things was that Aliens of London/World War 3 was the first multipart story and we were treated to a pretty decent cliffhanger.  I guess that is something and the electricity effects were kind of cool.  Luckily it gets better with the next story.
Grade D+
Posted by DR5WHO at 5:10 PM