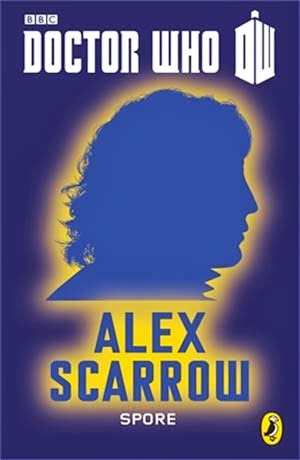 Doctor Who:
Spore
By Alex Scarrow

The Doctor lands in the Nevada dessert and walks right into a quarantine zone.  It appears that some sort of biological outbreak has happened at Fort Casey.  What is happening is that a spore a byproduct of it would touch a human and infect them where they would simply have their flesh turn to liquid.  That’s just one part of the problem as the liquid would move and attack the humans as it formed into a crab like creature.  The Doctor is horrified and unfortunately he has heard of this type of biological weapon before from his planet of record of an epidemic on Gallifrey.

The Doctor heads into Fort Casey where he finds a woman that is a sole survivor of the expedition that went in earlier.  Captain Evelyn Chan explains to The Doctor what has happened and he reassures her he knows how to stop it.  You see you have to find the main creature that will ask a question to see if the planet is intelligent enough to spare and if not it will assimilate the entire planet in their maker’s image.  Fortunately for Earth The Doctor has the answer.


Spore is an excellent short story from the Puffin Series of Doctor Who shorts to celebrate Doctor Who’s 50th Anniversary.   This story held my interest throughout and I could not put it down.  In fact I read this story in one sitting as it was that good and I was so engrossed in it I wanted to find out what would happen next.  I liked how intense it was and it had a shade of horror to it that was different from the other stories in the series.  It had that behind the sofa feel to it and I love when Doctor Who does that.

I have been pretty critical of the short stories that Puffin has been putting out with the childrens authors taking on writing for Doctor Who as some of the stories did not have a feel of a Doctor Who story or of the Doctor they are writing for.  In fact one story hardly had The Doctor in it at all.  But lately with Spore and Ripple Effect I have been really pleased and entertained with the story that they came up with as they were really well written and very entertaining and really intelligent in their approach. Spore is a story that I highly recommend and either by the digital short or wait for the collection in November it is really worth the time to read it.
Grade A