Doctor Who 50th HashTag, Idents Announced During Atlantis and Behind The Scenes Picture Released

The BBC have announced that hashtags and idents for the 50th Anniversary special will be released during Atlantis tonight.  There is also news that the trailer is being made and news of that release will be forth coming.  They also released a behind the scenes picture of the special also.  Nothing all to revealing as it is a bunch of Daleks similiar to the ones they have released in July.  You can view the tweets and pictures below.

#DoctorWho fans, tonight, immediately before & after @BBCAtlantis (8.25pm) we will reveal the ident & hashtag for the 50th anniversary ep.
— BBC One (@BBCOne) September 28, 2013


We have shot a brand new never-seen-before trailer for the 50th anniversary which is currently in post-production... #DoctorWho
— BBC One (@BBCOne) September 28, 2013


@bbcdoctorwho fans, tonight's stings are of the official hashtag &the new graphic for the 50th -no footage from The Day of the Doctor trail.
— BBC One (@BBCOne) September 28, 2013 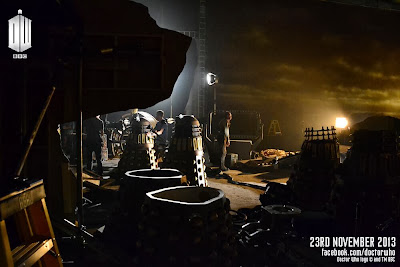