Doctor Who 50th Anniversary: The End Of The World By @Paul_Bowler 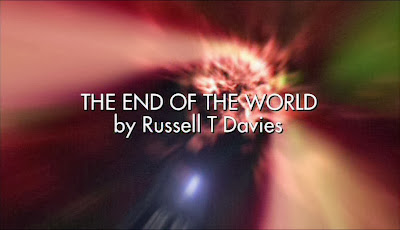 Doctor Who:
The End Of The World
By Russell T. Davies
Reviewed By Paul Bowler

"You think it'll last forever, people and cars and concrete, but it won't. One day it's all gone. Even the sky. My planet's gone. It's dead. It burned like the Earth. It's just rocks and dust before it's time."


The Doctor and Rose travel to a space station 5 billion years in the future, where the Earth is about to be destroyed by the sun. A number of alien guests have been specially invited to Platform One to watch the planets final moments. While the Doctor and Rose mingle with the guests, robotic spiders begin to infiltrate the station, killing members of crew and hacking into the computer systems.

While Rose struggles to cope with her new surroundings, the Doctor teams up with one of the alien guests, Jabe from the Forest of Cheem, to uncover who is trying to destroy Platform One. They later discover that the robotic spiders are being controlled by Lady Cassandra, the last human, a woman who has had so much cosmetic surgery she is now little more than a stretched out sheet of skin held together by a metal frame. She is driven by greed and vanity to fund her operations, and intends to take over everyone’s investments after the station burns. 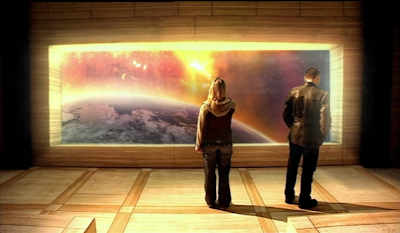 As the shields begin to fail, the Doctor and Jabe attempt to restart the computer systems, but they only have a few minutes left before the sun destroys the Earth and Platform One. In order to help the Doctor get past the giant blades that block their path, Jabe holds down the lever to slow the fans, but the extreme heat causes her wooden body to catch fire, and she is killed.

The Doctor manages to get past the last fan and restart the stations systems, and raises the shields just as the Earth is blasted to pieces by the sun. After being reunited with Rose, the Doctor uses Lady Cassandra’s teleportation device to bring her back to the station, but without her guards to moisturise her, she begins to dry out. Cassandra begs the Doctor for mercy, even Rose asks him to help, but instead he stands back and lets Cassandra explode. 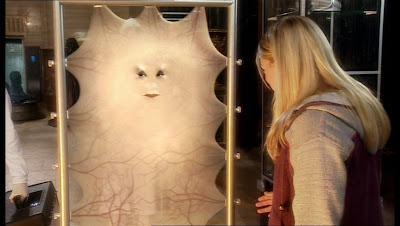 Rose watches as the shattered remnants of the Earth tumble past the observation window, she is sad by her world’s demise, so the Doctor takes her back to the present day in the TARDIS, where they arrive in the middle of a bustling street. The Doctor finally tells her that he is a Time Lord, explaining how his world burned in a war, and that he is now the last of his people. Rose tells him he still has her, before leading the Doctor away to buy him some chips.

Written by Russell T Davies and directed by Euros Lyn, The End of the World was the second episode in the new 2005 series of Doctor Who. Boasting some incredible CGI special effects, this first season episode also introduces a wealth of alien species: ranging from the blue skinned Moxx of Balhoon, the mysterious Adhernets of the Repeated Meme, and the bizarre Face of Boe. The evil Lady Cassandra voiced by Zoe Wanamaker, is a brilliant villain. Her flesh is now stretched so tightly in its frame that she needs to be constantly moisturised to preserve her looks. Jabe is another superb character, originating from the Forest of Cheem, she is intrigued by the Doctor and Rose and forms a close bond with the Time Lord over the course of the story. 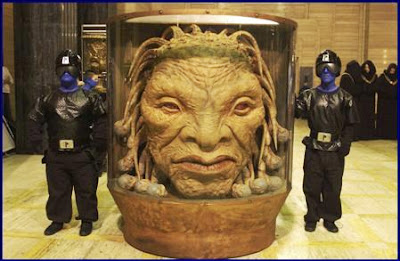 The special effects in The End of the World are really impressive, especially the scenes with Platform One orbiting the Earth as is faces destruction, and then later when the sun filters begin to fail. Rose also becomes trapped in one of the room when the filter malfunctions, and the Doctor has to race against time to save her. The robotic spiders that Cassandra uses to take over Platform One are also highly effective, and Cassandra’s stretched skin and pulsating veins is another example of this episodes impressive visual effect.

Christopher Eccleston is great as the 9th Doctor; his incarnation of the Time Lord is a troubled soul who is still recovering from the aftermath of the Time War. At first he seems to be overcompensating, to a degree where he is almost showing off, as he delights in introducing Rose to all the different alien guests on the station. He also grows very close to Jabe (Yasmin Bannerman), they have some great scenes together, and she later makes the ultimate sacrifice to save Platform One. 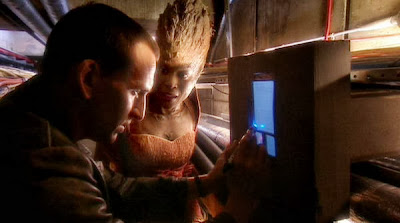 Billie Piper is very good in this story as well as Rose finds herself overwhelmed by her surrounding and all the strange aliens she encounters. She also argues with the Doctor because he keeps evading her questions about his identity, and afterwards the Doctor adapts Rose’s mobile phone so she can call home and talk to her mum.

The End of the World sets up many of the new elements of the new series, as well as including some vital information for new viewers who might not have been overly familiar with Doctor Who. This is the first adventure in the new series to be set in the future, the psychic paper is also used for the first time to help the Doctor and Rose fake their credential, we learn of the Time War and how the Doctor is now the last of the Time Lords, and the Doctor also explains to Rose how the TARDIS can telepathically translate any language into English for them.

Although the crisis on the station is resolved quiet simply, and the way the 9th Doctor refuses to help Cassandra seems a bit ruthless, The End of the World concludes with a brilliantly emotional coda where the Doctor finally opens up to Rose and explains who he really is. This poignant moment is perfectly played by Christopher Eccelston and Billie Piper, its a brilliant scene, and the way they smell fast food and suddenly want chips provides a great end to this exciting episode.
Posted by DR5WHO at 8:00 AM