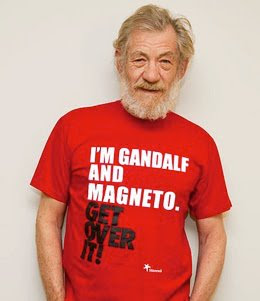 Ian McKellen can now add Sherlock Holmes to the numerous roles that he has played in geekdom.  He will be playing an old Sherlock Holmes in the movie adaption of the novel A Slight Trick Of The Mind.   The announcement was made at this years Toronto Film Festival and you can read the press release below.


ICON/AI FILMS TO FINANCE AND CO-PRODUCE
A SLIGHT TRICK OF THE MIND, DIRECTED BY BILL CONDON
AND STARRING IAN MCKELLEN

TORONTO - Thursday 5 September 2013.  AI Film, the production arm of the Icon UK Group owned by Len Blavatnik’s Access Industries, has announced it is financing and co-producing   A SLIGHT TRICK OF THE MIND to be directed by Oscar®winner Bill Condon and starring Ian McKellen in the lead role.

Set to film next April in the UK, the film will be produced by Anne Carey, producer of Anton Corbijn’s The American, through her new venture Archer Gray Productions, Iain Canning and Emile Sherman of See-Saw Films, producers of the Oscar®-winning British feature The King’s Speech, with Aviv Giladi, CEO of Icon/AI Film, and Len Blavatnik exec producing.  Christine Langan, Head of BBC Films, is an exec producer on behalf of BBC Films which is also co-financing.

Based on a novel by Mitch Cullin, A SLIGHT TRICK OF THE MIND, the screenplay is being adapted by Jeffrey Hatcher whose credits include The Duchess, Casanova and Stage Beauty.
In 1947, Sherlock Holmes, long retired, lives in a sleepy Sussex village with his housekeeper and her amateur-sleuthing son. But far from living out a peaceful retirement, he is haunted by an unsolved case from fifty years ago. He remembers only fragments: a confrontation with an angry husband, a secret bond with his beautiful but unstable wife.

With his legendary mental powers on the wane, and without his old sidekick Watson, Holmes is faced with the toughest case of his life – a case that might finally reveal to him the mysteries of the human heart.