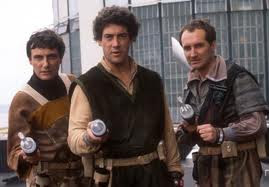 I really don't know what to make of this but I09 is reporting that Microsoft is now doing the remake of Blake's 7 for the X-Box.  The series would be available to X-Box subscribers.

Earlier this year Microsoft announced that a Halo TV series a few months ago and Steven Spielberg will be an executive producer.

One suspects that if this were true then the Blake's 7 series would eventually make it to the main stream TV or internet and eventually home video.  While details for Blake's 7 are few, Martin Campbell (Casio Royale) is rumored to be directing the pilot.  Campbell was rumored to be directing the pilot when SyFy was handling this so it is possible that Microsoft will produce the show, give it to X-Box exclusively for a short time and then air it on SyFy.