Synopsis For Doctor Who Starlight Robbery 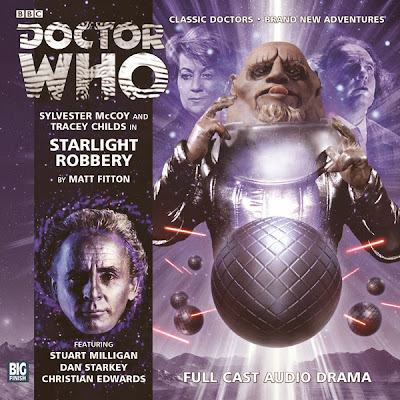 The 7th Doctor series continues this month with an encounter with the Sontarans. It also guest stars Dan Starkey who plays Strax in the new series.  You can get it from the Big Finish website.

Sick of the same-old slaughter-appliances? In need of a killer new killing-machine? Then look no further than Garundel Galactic's secret arms auction. Blasters, tanks, missiles and bombs – no bang too big or micro-laser too small. If you’ve got the credits, Garundel's got the kill-sticks. (Cash buyers get preferential rates.)

In search of the key to a sinister alien technology, the Doctor, Klein and Will set their sights on an illicit intergalactic arms fair run by an old acquaintance – the slippery Urodelian crook, Garundel. But what are their chances of pulling off a particularly audacious heist from under the noses of Garundel and his alien clients, the ever-belligerent Sontarans…?