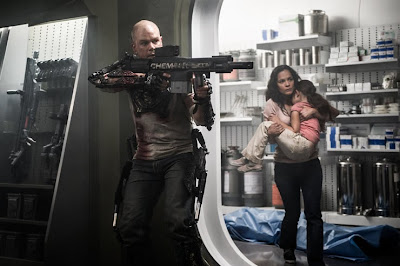 Why do I always set my self up for disappointment? Elysium might have been my favorite movie of the year had I not actually watched the movie this past weekend. It has some good elements including Neill Blomkamp, who did a very good job directing and writing District 9 in 2009. I like Jodi Foster and Matt Damon has his moments. Sharlto Copley (District 9, Europa Report) is also someone I'd like to see more of in movies. So what went wrong? 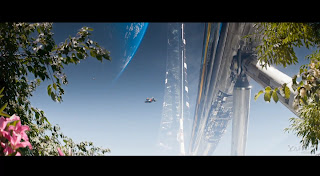 The movie fits right into the Blomkamp style of story telling. We have a world and people who are poor, over crowded and in decay and then we have the other side who are rich and healthy. Elysium is an orbiting space station where the rich people live. They have all the luxuries including lavish pools and houses as well as robotic assistants and medical pods that heal all kinds of damage including cancer, cuts, breaks, etc. Meanwhile people on Earth, or at least L.A. live in ruins and garbage. They are dirty, injured, sick and desperate. We see to what lengths people will go to try to get to Elysium to use these medical pods at the risk of their own lives.

Max (Matt Damon) is an ex-criminal who is trying to keep his job and avoid falling back into his darker times. He is stupidly irradiated during his job and only has days to live. Now he sees no choice but to somehow get up to Elysium to use one of those med pods. 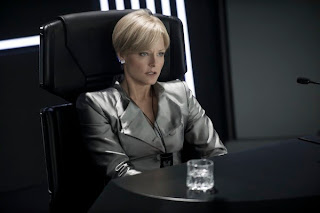 Meanwhile the head of security on Elysium, Delacourt (Jodi Foster) is very adamant that no unauthorized people from Earth ever enter Elysium and she is unhappy with the way the president is running things so she hatches a plot that will give her control of the station. This requires an executive she blackmails to input a virus into the main frame. The executive, John Carlyle (William Fitchner) begins to return to Elysium in a shuttle but is shot down by a group of terrorists who have teamed up with Max in order to get to Elysium. They download Carlyle's mind in order to get the codes to get to Elysium but also get Delacourt's plot to take over the station. 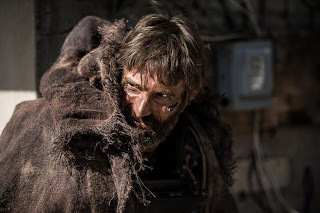 Max is being pursued by bounty hunter Kruger (Sharlto Copley) which leads to the majority of the action in the film. Caught in the cross fire is Max's childhood friend, Frey (Alice Braga) and her daughter, who is terminally ill. They all get to Elysium and one by one attempt to complete their agendas of getting a cure, sabotaging Elysium, taking over Elysium and so on. 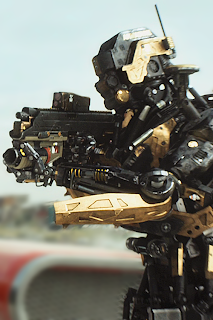 Wow. Now the story is fine but a number of coincidences and convenient happenings occur throughout the film that really make it hard to believe. Max getting ill in the first place makes little sense. He goes into a machine to free a jammed door, knowing the door was going to close. He then has a friend who knows a friend who happens to have a plan to attack Elysium using exo armor, which is surgically grafted onto Max. His friend from childhood has a kid who is dying and they are taken by Kruger whose face is blasted off but is then repaired by the magic med pod. Kruger then goes after Max and the most annoying fight of the movie ensues.

Okay, there were a bunch of issues – Where is everyone on Elysium? There seems to be only a few people around, allowing the rebels free reign to run around and cause havoc. In the end a fleet of medical ships are programmed to go to Earth to start a mass curing of everyone but why are there this many and why did this technology not exist on Earth in the first place?

Now, the cast was okay. Copley was excellent and Damon was passable for the most part. Foster was wasted. Was she just evil or did she have a reason to want to take over and why did she give up so easily?

The story was pretty basic with a fair amount of politics in it, as is Blomkamp's way. The look of the film is superb and returning are the hyper realistic effects that helped make District 9 so great. With effects and design well in hand, Blomkamp seemed to let the script down on so many levels. The ideas were fine but the amount of coincidences is staggering. The virus rebooting Elysium and allowing all people access to the med pods is a stretch and you would think reversible before too many people are repaired. One can imagine everything going back to the way it was within a few hours.

Anyhow, I enjoyed the look and the idea but wished the execution was a bit better. The action was not as polished as much of the rest of the film although I will say the gun battle over the crashed shuttle was pretty good.

It is a visual movie and might benefit from a theatrical viewing or at least an HD watch at home on a big screen TV.   I so badly wanted to like this film and like last year's Prometheus, enjoyed it enough to give it a rocky thumbs up.  I would love to see more of Blomkamp's designs, effects and ideas but with a cleaner plot.
Posted by SHADOKP at 8:52 PM