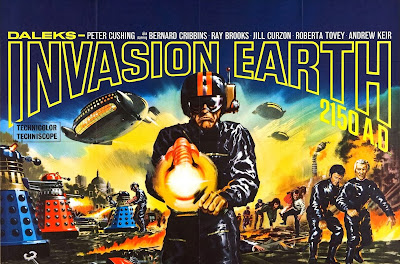 
Released on 5th August 1966, a year after Dr. Who and the Daleks, this sequel is probably slightly superior to the first Regal Films production yet fared less well at the box office. Again based on a Terry Nation storyline which had already appeared on television in the canonical world of Doctor Who, Milton Subotsky’s screenplay was also worked on by David Whitaker who, like Nation, had himself written several Hartnell era stories for the show. Gordon Flemyng was again directing and musical lessons had possibly been learnt from the first film as the incidental music is less frantic and supports the action more successfully although there is still a tendency towards the twee rather than truly dramatic instrumental interludes.

Peter Cushing returns as Dr. Who, the human clever clogs who has built the Tardis. Roberta Tovey is back playing Susan but her older sister is nowhere to be seen. Instead a niece of the Dr. is on board, Louise(Jill Curzon). Joining them, after a failed attempt at foiling a robbery from a jewellery, is Bernard Cribbins as Special Constable Tom Campbell. Yes, Bernard Cribbins who would stamp himself all over the revived TV show between 2007-10 as Wilfred Mott, grandfather of Donna Noble.

Happily the producer has clearly realised that the slapstick interludes given to Roy Castle’s character in the first film were incongruous and Cribbins is not burdened with such light relief duties, instead largely being allowed to play a more straightforward action hero.[1] There are quite a few heroic types: Ray Brooks handles the role of David, the young man with whom Susan stays at the end of  the TV version of this plotline. Dortmund, the leader of the human underground resistance shows great courage in sacrificing himself to save others mid-movie.

If Dr. Who and the Daleks plays on Nazi tropes, Invasion can be read as a version of the French Resistance while Hitler’s soldiers were occupying their country. Which also means the evils of collaboration for some characters, as evidenced by two women in a lonely cottage who betray Susan to the Daleks and the supercilious Philip Madoc playing an opportunistic swine with no discernible allegiance to either humans or Daleks. Yes, Philip Madoc who would later appear in the real Doctor Who on four separate occasions, most notably in classic Tom Baker serial The Brain of Morbius.

Beyond the theme of occupation the main premise of the film is that the Daleks are using human slaves to dig down into the centre of the Earth in order to set an explosion which will strip the planet of its magnetic core. Once this is done the planet can act as a spacecraft which the Daleks intend to fly off towards Skaro and live on, presumably because their home planet is becoming uninhabitable even for them.
There are plenty of flaws, not least of which is a terrible lack of continuity. Cribbins, spontaneously searches for Louise aboard the Dalek ship despite not having been informed by anyone that she had been part of the party attempting to rescue Cribbins and the Doctor, who had just narrowly avoided being turned into robomen slaves. The Daleks can apparently pinpoint a single truck driving across country and yet are incapable of working out where the human resistance groups might be hiding. Dortmund’s bombs are supposed to be ineffective against the Daleks yet several Daleks are seen to explode once they’ve been attacked with just these devices.

The Dalek spaceship is good though, even accounting for the scene in which the strings holding the model in the air are embarrassingly visible. The Dalek voices are more intimidating than in the previous film too, the vocoder obviously having been set at the right rate of modulation. It helps that the word ‘exterminate’ is as conspicuous by its overuse as it was by its absence in Dr. Who & the Daleks. Peter Hawkins and David Graham again provide the voices for the metal dustbins (as Dortmund calls them).
The suits worn by the robomen make them look like nothing so much as Dalek gimps. All they need is a ball gag and for the Daleks to make them writhe around on the floor begging to be hurt and the movie could have found itself a cult BDSM following.

The denouement is somewhat rushed. The main protagonists, having been separated into little clusters throughout the film, regroup at the mine where the Daleks are digging down towards the Earth’s core. Amidst reunions Cribbins is instructed to climb into the deep shaft and somehow divert the Dalek’s bomb down into an older shaft. Here, apparently, the bomb will set off a magnetic reaction which will do for them pesky Daleks good and proper. Which begs the question, why wouldn’t the magnetic core of the planet have caused them problems in the first place? This is a flaw which has not been resolved from the TV series so they just carry on regardless. It does allow for some fantastic Dalek deaths, however, with one or two metal pepperpots being sucked into the shaft in a fashion that will be very familiar to those who watched Daleks and Cybermen being pulled into the void at the end of 10th Doctor story, Doomsday.
As a nice twist and a decent use of the time travel aspect of the Tardis, the film ends with Cushing returning Bernard Cribbins to his own timeline but a few minutes before the robbery in the jeweller’s shop. This lets Special Constable Tom Campbell render the getaway driver unconscious and then knock out the other two robbers when they climb into the car. He drives them off to the station daydreaming about promotions and OBEs. 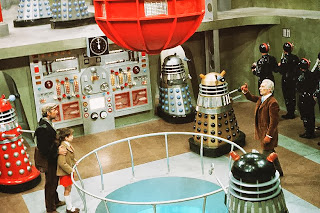 Had the movie fared better at the box office there were plans to film another Terry Nation Dalek story, The Chase. It was not to be, thankfully. Despite having learnt lessons from the first film, Daleks: Invasion Earth 2150 AD, is still a substandard B-movie. The effects are slightly improved, the acting better but  Cushing is almost a co-star in his own movie. Some would argue that the Daleks themselves are the stars and they come across better here than the other film. Even so, they still seem less menacing than they do on the small screen. Not even trundling along some familiar landmarks can increase the scare factor. Luckily the adventures of a time traveller in his police box would remain on the television where they belonged and nobody would ever again make the mistake of trying to turn Doctor Who into a film format. Oh damn, except for that McGann movie, of course.
[1] Ironically, Cribbins is a superior comic actor to Castle but it is nevertheless still a blessing that the film does not descend into pratfalls and silliness.
Posted by DR5WHO at 9:54 AM