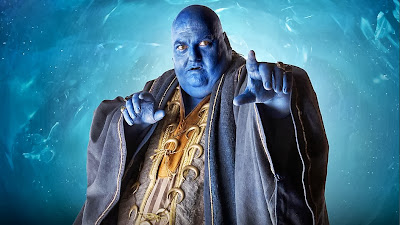 LI Who is happy to announce the addition of Simon Fisher-Becker to our guest lineup.


Simon is best known for his portrayal of Intergalactic Marketeer, Dorium Maldovar in the BBC’s hugely successful - Doctor Who.  Starring such episodes as The Pandorica Opens, Prequel to A Good Man Goes to War, A Good Man Goes to War, and The Wedding of River Song. All of which take place during the current Doctor Matt Smith’s era. Simon has also performed for the Big Finish line of Gallifrey audio series in Gallifrey V with Lalla Ward and Louise Jameson.


Simon is in the upcoming new comedy series for BBC- Puppy Love along with Jo Scanlon and Vikki Pepperdine, co-writers of ‘Getting On’. His past works include such films as Harry Potter and the Sorcerers Stone in which he played The Fat Friar as well as Les Miserables and Beg!
His Theatre work includes: Exclusive, The Busybody, The Emperor of the Moon, An Inspector Calls, A Midsummer Night’s Dream, Macbeth and his one man play Hamlet: Tragedy of a Fat Man by Paddy Gormley.


As a writer Simon is currently working on ‘G N U’ a six part Comedy Drama set in the
world of Arts Theatres.  ‘My Dalek Has a Puncture’ is a light hearted account of Simon’s experiences leading up to being offered the role of ‘Dorium Maldovar’. Simon enjoys singing comedy songs from Gilbert & Sullivan to Cole Porter and Flanders & Swann.  He has a broad taste in music from Beethoven to BB King and is able to conduct a full symphony orchestra.


L.I. Who is Long Island and the Greater New York area’s Doctor Who Convention. It will be held on Long Island NY November 8,9,10, 2013.
http://LongIslandDoctorWho.com/
Posted by DR5WHO at 6:09 PM

Email ThisBlogThis!Share to TwitterShare to FacebookShare to Pinterest
Labels: doctor who, LI Who, Long Island Doctor Who Convention