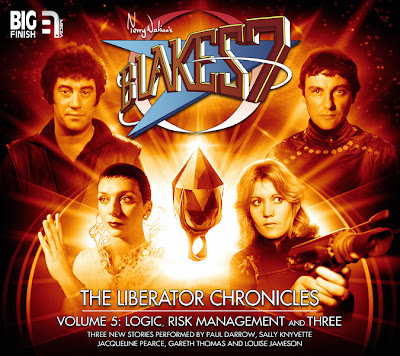 Here is the new Blakes 7 release featuring cast members from Series21 Gareth Thomas, Paul Darrow, Sally Knyvette and Jacqueline Pearce.  The synopsis is below and you can order form the Big Finish website.
http://www.bigfinish.com/releases/v/the-liberator-chronicles-volume-5-739

Three enhanced audiobooks performed by the stars of the classic BBC television series. These stories are set during Series 2.

Logic by Simon Guerrier
Starring Louise Jameson as Pol and Paul Darrow as Avon, Sally Knyvette as Jenna, Jacqueline Pearce as Servalan
Pol is an ordinary woman living an ordinary life on Earth. So why are the crew of the Liberator so interested in her?

Risk Management by Una McCormack
Starring Gareth Thomas as Blake and Sally Knyvette as Jenna
When Blake and Jenna go to the aid of the planet Sutskar, they become embroiled in deception and betrayal.

Three by James Goss
Starring Jacqueline Pearce as Servalan and Joseph Kloska as Cullen
The renowned journalist Cullen has the scoop of a lifetime - an interview with Supreme Commander Servalan herself. It will be the greatest mistake of his life.