Doctor Who 50th Anniversary: The Bodysnatchers By @Paul_Bowler 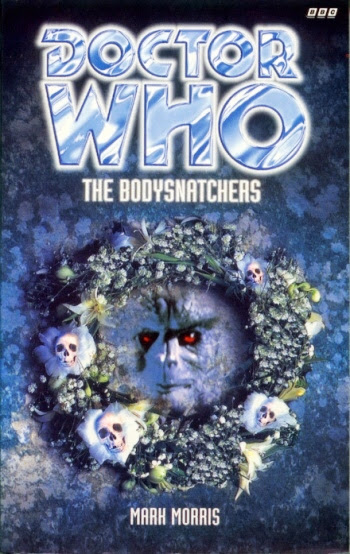 Doctor Who:
The Bodysnatchers
By Mark Morris
Reviewed By Paul Bowler


When the TARDIS materialises in London, 1894, the Doctor and Sam discover a terrifying mystery lurking in the fog shrouded streets near a factory, where the owner - Nathaniel Seers - has begun to behave very strangely indeed. The bodies of the dead have started to go missing, stolen from their graves, and some unspeakable horror prowls the banks of the Thames - ready to rise up from the filthy waters to feast on human flesh.

The Doctor is reunited with his old friend, the pathologist George Lightfoot, and together with Sam and Nathaniel Seer’s daughter, Emmaline, they help him to investigate the recent state of horrible occurrences. They uncover the truth behind grave robbing after they find the entrance to a living space ship, where the Zygons have been using the human remains to feed a monstrous hoard of Skarasen, which they intend to use to wipe out the human race and make a new home for the Zygons.

With the help of Sam and Lightfoot, the Doctor must find a way to defeat the Zygons before they can unleash their Skarasen army on the world…
The Bodysnatchers is an intensely gritty and dark story by Mark Morris. While the story may be a bit thin on the ground plot wise, the macabre setting and grisly scenes of death and mutilation more than makes up for any failing. The character of the eighth Doctor feels right a home here, exploring the foggy streets of Victorian London, Sam also gets plenty to do, and she is turning out to be a very resourceful companion.

This story also features the return of Professor Lightfoot, who appeared in the classic Dr Who adventure The Talons of Weng- Chaing written by Robert Holmes. Mark Morris has captured the essence of the character brilliantly, Lightfoot has some great scenes with the eighth Doctor, and they work really well together as they face the menace of the Zygons.
We also get to learn a lot more about the Zygons in The Bodysnatchers. Having only appeared in one television story, Terror of the Zygons (1975), writer Mark Morris takes the opportunity to really explore the history of the Zygon race. We discover more about their culture, the intricate technology of their spaceships, their warrior castes, and we are given an even greater insight into the circumstances that brought them to Earth.

The Bodysnatches is a brilliant adventure for the eighth Doctor and Sam, it’s a devilishly gruesome story, and the return of Professor Lightfoot and the Zygons makes it all the more special. A really enjoyable read and highly recommended.

Email ThisBlogThis!Share to TwitterShare to FacebookShare to Pinterest
Labels: 8th Doctor, doctor who, The Bodysnatchers, The Zygons