Doctor Who 50th Anniversary: Doctor Who and The Daleks By @ThePlanetHarris 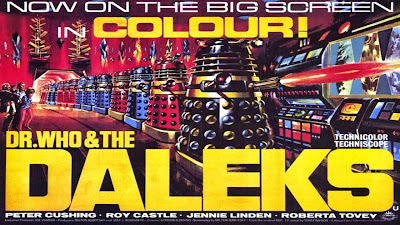 Doctor Who:
Doctor Who and The Daleks
1965 Movie
By Terry Nation
Reviewed By Steven Harris

In late August of 1965 Regal Films International released a movie based on Terry Nation’s BBC Doctor Who storyline, The Daleks, which had initially been screened eighteen months earlier. The screenplay, adapted by Milton Subotsky but remaining reasonably faithful to the original Nation script, showed an entirely new crew for the Tardis zipping off across time and space to encounter the already iconic metallic pepper-pots from Skaro.

In much the same way that the 1967 version of Casino Royale and Never Say Never Again (1983) are not considered to be part of the James Bond canon, director Gordon Flemyng’s forays into Dr. Who movies are not incorporated into the history of the BBC television show or the character of the Doctor himself. Whether the BBC had designs on a theatrical release of their hugely successful science-fiction show, as some suggest, or not is irrelevant: Terry Nation had created the Daleks and was perfectly within his rights to wish to exploit the concept on the big screen. Some deal must have been done, however, to allow Regal Films, a company more known for budget horror nonsense, to use the Doctor’s name and the acronym TARDIS (the ship is still a familiar blue police box which presumably was not copyrightable at that time, even though the BBC did copyright the image once such devices were no longer being manufactured or used by the British constabulary). 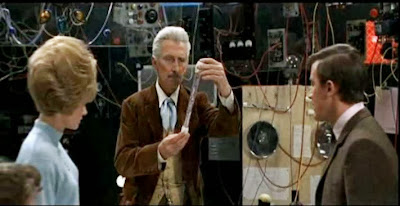 Peter Cushing plays a human who is a doctor (of what we are not informed) and whose surname is Who. Now I’m nitpicking I know and to the ear Doctor Who and Dr. Who sound exactly the same but the principle facet of the character is entirely altered with such syntactical sleight of hand. Basically the character as a human is all wrong (don’t get me started on the ‘half human’ claim of Paul McGann’s Doctor, which is considered canonical). Right from the off, then, this is a watered-down time-traveller, suitably served therefore by a gaudy, brass-heavy soundtrack and incidental music which could not be further from the world of the BBC radiophonic department’s effects for the television show.
Further changes to the group dynamic follow but are less impactive than the alteration to the main character. Susan, played by Roberta Tovey, is still his granddaughter but she is a much younger girl. Barbara (Jennie Linden) is Susan’s older sister and Ian is Barbara’s boyfriend played with unnecessary slapstick overtones by Roy Castle. Castle’s mugging and pratfalls often serve to distance the audience from the action and frequently interrupt the dramatic flow.

Once the gang are all assembled in Tardis (not ‘the Tardis’ apparently which actually makes more grammatical sense, a rare logical improvement on the TV show) the plot follows pretty much the same lines as the William Hartnell adventure which Terry Nation had written almost two years earlier. The pacing is quicker, however, less need for filler in amongst the expositional dialogue as the entire adventure lasts for less than an hour and a half onscreen whereas the original had covered seven 25 minute episodes. The Daleks themselves are shinier and have the added advantage of being in colour. Once this novelty has worn off, however, they seem somehow less menacing than their television counterparts even though the voices were provided by Peter Hawkins and David Graham, just as they were for Hartnell’s Doctor. Perhaps it is the absence of the word ‘exterminate’. Perhaps it is the fault of the so-called light relief offered up by Roy Castle. Whatever the reason, these tin monsters come across more as stroppy toddlers than as the demonic, xenophobic villains they ought to be.
The history of how the Daleks came to be mutated and encased in their mobile units is all there, told both by the Daleks themselves and by the Thals who are descended from those against whom a neutronic war had been waged. The crux of the story is the fact that the Thals have concocted various drugs which combat the effects of the planet’s still highly radioactive atmosphere. When the Daleks learn of this they are determined to obtain some of the drug and replicate it for their own use so that they can leave their machines and their city behind, presumably to go killing and conquering across the face of the planet once more.

The contrast between the monotone, angry Daleks and the beatific, even angelic Thals plays on a science-fiction trope that goes at least back as far as the Eloi and the Morlocks from H.G Wells’s classic The Time Machine (1895). It also builds on more recent realities with the Daleks standing for the eugenically-obsessed Nazis during the 1930s and 40s. Yet the plot, so atmospherically played out in black and white on the small screen, does not translate so well to cinematic colour and scale. The dialogue is often too rushed, the sets look fairly cheap although there is a great back-painting of the surface of Skaro and a distant moon at one stage. While a 1960s TV audience might accept that an alien planet resembles nothing so much as the interior of a Shepperton television studio, the same effect at the cinema lessens the impact. I would assume that the greatest expenses on the shoot were Cushing’s fee and the cost of the Thals’ make-up which was caked on in a manner the teenagers of the 70s would themselves adopt in homage to another beatific alien: David Bowie.
When the Daleks realise that they have become too mutated for the anti-radiation drug to enable them to return to a more humanoid form they have a full-on tantrum and decide that they’ll just bomb the crap out of Skaro instead in order to remain the only living species able to survive. The ordinarily peaceful Thals are persuaded to fight the Daleks in order to protect their own future by a bit of psychological manipulation which worked quite well for Hartnell but which seems hurried and unconvincing here. A last battle ensues, the Daleks’ spiteful plan is thwarted and everyone is happy. Except the Daleks, obviously, but they are never happy. Shouty, shooty, exterminatey – yes. Happy – no.

The movie must have done reasonably well at the box office as a sequel was commissioned and released the following year but in terms of the world of Doctor (not Dr.) Who, both films are an addendum, a trivial footnote and an early lesson to movie makers that successful TV shows do not necessarily make for successful film formats (a lesson the makers of films such as Miami Vice, Scooby Doo, George & Mildred and countless other abominations really should have heeded).

I do not know whether Matt Smith has ever watched the Cushing films but there is a similarity in the gait of Cushing’s Dr. and Smith’s 11th Doctor. Smith is naturally slightly bandy, Cushing was, I believe, assuming a quirk in his characterisation. The bow-legged stance is a minor familiarity that merely reminds me that the show continues to be best served by television. By all means grab yourself a BluRay copy – the extras will no doubt be interesting and completists can die safe in the knowledge that they gathered everything vaguely Whovian that is on the market. Just don’t expect to be wowed by effects, acting or by the impact of a largely pointless attempt to carve the good Doctor’s legend onto the big screen.
Posted by DR5WHO at 9:31 AM

Email ThisBlogThis!Share to TwitterShare to FacebookShare to Pinterest
Labels: doctor who, Doctor Who 50th Anniversary, Doctor Who Movies, Peter Cushing