Doctor Who 50th Anniversary: Eater of Wasps By @Paul_Bowler 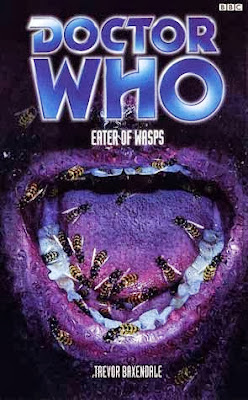 Doctor Who:
Eater of Wasps
By Trevor Baxendale
Reviewed By Paul Bowler


The TARDIS arrives in the quiet little village of Marpling in 1933, where the Doctor, Anji, and Fitz discover that a deadly artefact from the future has been unleashed on the unsuspecting villages. Having taken over a wasps nest in a garden shed, the device mutates the insects, which then begin to attack the villages. But the Doctor and his companions are not the only time-travellers here. A special team of commandoes have been sent to deal with the threat, with orders to either recover the weapon or destroy the entire area if anything should go wrong. The Doctor and his friends must find a way to stay one step ahead of the time-travelling soldiers, as well as the local authorities, in a desperate race against time to track down the source of the outbreak and save the world.

Eater of Wasps is a compelling and dark eighth Doctor Novel by Trevor Baxendale. The Doctor is still recovering his memory as this point, making him a little erratic and unpredictable at times. Baxendale captures the eighth Doctor’s character perfectly, with the Time Lord reminiscing about his past as events unfold around him, before flying into action when danger strikes. New companion Anji begins to revaluate her life, while trying to decide if she can trust the Doctor. Fitz doesn’t get quite as much to do in this story, but he has some great scenes with the Doctor, and he works really well with Anji. They each see different sides to the Doctor, with Fitz being more trusting while Anji has her doubts, and this creates an interesting dynamic between the Time Lord and his companions.

The villagers are all well developed characters: there is a nosey neighbour Mrs Havers, as well as the dynamic Hilary Pink, lonely teenager Liam, and Charles Rigby, who are all just a few of the colourful and eccentric characters that populate Baxendale’s story. The time-travelling commandoes are also a great bunch of characters, especially Kala, and her scenes with the Doctor are excellent.

Eater of Wasps contains some very graphic and disturbing scenes of horror, as the wasp’s attacks become increasingly violent, and the ghastly images of wasps pouring into peoples mouths will linger long after you have finished the book. Rigby’s transformation is also brilliantly handled, and genuinely horrifying. There is a gut wrenching autopsy scene, a creepy moment where the Doctor and Fitz explore Rigby’s house and a fantastic sequence on a train.


This is an extremely well written eighth Doctor book, with a great TARDIS crew, and the story is thoroughly engaging, if a little horrific in places. Eater of Wasps is a very traditional feeling Doctor Who story, full of well written characters, and it has some chilling scenes of body horror that are sure to make your skin crawl. It starts slowly and quickly builds to a nail biting showdown, a great book, and highly recommended.

Email ThisBlogThis!Share to TwitterShare to FacebookShare to Pinterest
Labels: 8th Doctor, doctor who, Doctor Who Books, Eater of Wasps