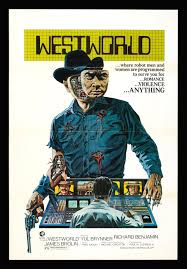 HBO and Bad Robot are teaming up to make a TV series based on the 1973 movie, Westworld, which starred Richard Benjamin, James Brolin and Yul Brynner.  The movie was about theme park with human like robots who run amok.  The movie had a sequel, Futureworld (1976) and very short lived TV series called Beyond Westworld in 1980.

Jonathan Nolan (Person of Interest) will be writing the pilot.

The director and writer of Westworld was Michael Crichton who would later go on to write a book and movie about a theme park where dinosaurs run amok!!