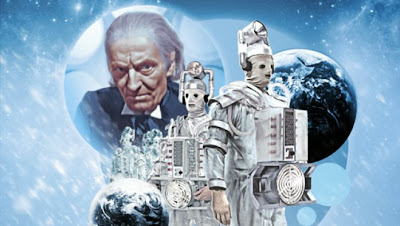 The TARDIS brings the Doctor and his friends Ben and Polly to the South Pole in 1986. Their arrival coincides with the appearance of Earth’s forgotten twin planet Mondas and visitors from that world – emotionless beings called Cybermen. It’s up to the Doctor and his friends to stop these creatures before they convert Earth’s population into similar cyber creations – but the encounter will have a devastating effect on the Doctor…

Source: Doctor Who TV
http://www.doctorwho.tv/whats-new/article/the-tenth-planet-dvd-cover-and-contents-announced
Posted by DR5WHO at 9:42 AM