Doctor Who - Cover and Synopsis For 10th Doctor Issue 2.1 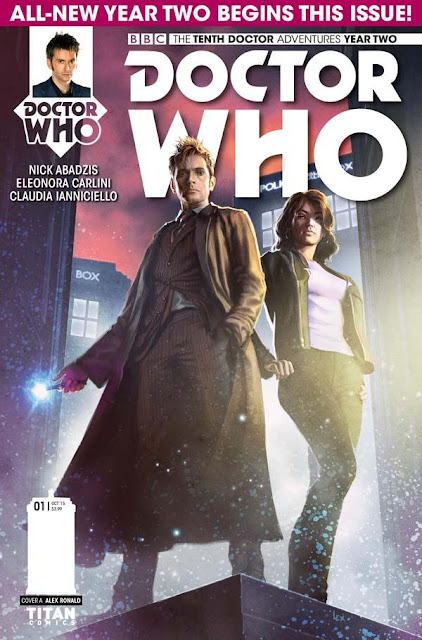 Out today is the new series for the 10th Doctor as The Doctor and Gabby start a brand new adventure.

SINGER NOT THE SONG', Part 1

A fresh new start to an all-new Year Two, as the Tenth Doctor ongoing series takes to the stars!

Looking for rest and relaxation, the Tenth Doctor and companion Gabriella Gonzalez take a trip to Earth Station Presley, a mining platform around an enormous gas giant – and home to one of the most spectacular sensory experiences in the universe!

The gas giant is a perfect example of human colonists living in harmony with indigenous life – in this case, the Shan’tee: conceptual beings perceived by humans as hauntingly beautiful music!

But the Doctor and Gabby are walking straight into a war.

Something has corrupted the song of the Shan’tee – a mysterious signal of unknown origin – and now the human colonists are trapped in a fight for their lives!

Can the Doctor, Gabby, and a synesthetic scientist uncover the truth and bring the war to an end without further bloodshed… or will the song consume them all?

And… why does Gabby feel like the alien foes she’s been facing are starting to rhyme...? Is there something less random and more sinister at work…?

Don't miss the all-new chapter in the lives of the Tenth Doctor, Gabby and Cindy!

For loyal readers - picks up from Year One and the 2015 Event!

Now 14 issues a year, one issue every four weeks, including a double-sized Special!

Nick Abadzis as a solo writer for Year Two!

Letterer
Comicraft
Posted by DR5WHO at 9:20 AM