Doctor Who - The Magician's Apprentice Review - Some Spoliers 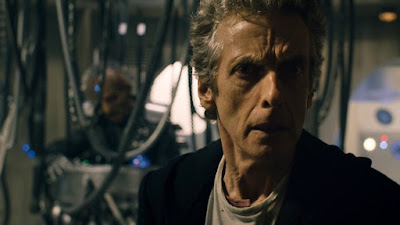 The Doctor is dying again... OH NO, what will we do.  Missy is the Doctor's best friend (obviously) and decides to recruit the help from Clara by stopping all planes in the world and meeting her in an outdoor cafe for coffee (obviously). Missy cannot find the Doctor anywhere but Clara and UNIT can - he is back in time having a party of a lifetime.  He is driving a tank around, playing guitar and teaching medieval people the word "dude" (of course). Missy using that magical time travel bracelets that are used sparingly in the series transports herself and Clara to where the Doctor is.  An alien who is actually made up of snakes summons the Doctor - Davros is dying.  Davros remembers and wants to meet the Doctor one last time. 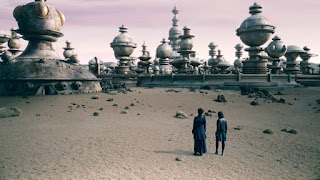 The Doctor and his companions Missy and Clara travel to a space station which is in fact the planet Skaro - a fact that is kept from our TARDIS crew for no apparent reason but kept from us, the viewers, for dramatic reasons. You have to remember that the monsters of Doctor Who love to reveal their presence in dramatic fashion to shock the Doctor (and viewers). 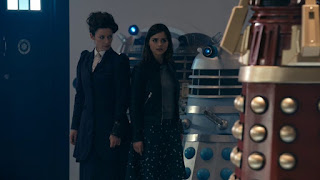 There Missy sings us a song and then is exterminated by the Daleks.  Clara decides to run and is also exterminated and the TARDIS blown up.  Davros has finally won!!  But wait Davros.  When Daleks kill people, there is a dead body.  Where are Clara and Missy's bodies? Perhaps they time manipulated away? 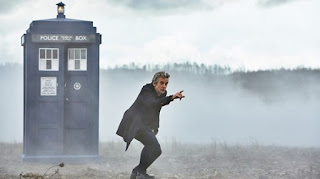 Okay, when you read the above description you might think that I hated this episode but I am being a bit unfair. The opening 15 minutes to this episode are pretty excellent.  We see that the Doctor is literally given a choice on killing a child that grows up to be responsible for countless deaths.  A young boy caught in a field of HAND mines.....get it.... hand mines, is about to be saved by the Doctor until he says his name - Davros. Ah, there it is then.  Now what?

Meanwhile on Earth all planes have stopped and similarly in Torchwood's Children of Earth, the Earth is held at ransom.  Clara, now an expert on this type of thing is called in to investigate.  All of this is excellent.  We reach the 15 minute mark in the episode and - Enter Missy! HAHAHAHAHA - in the worst entrance by any character in any TV show ever, we see Missy appear on a screen and then her head pops off the screen probably to appease the 3-D audiences in the theater for this episode later down the line.  The scene is horrible really. If I described this scene to any Doctor Who fan in the world and told them this was in an upcoming episode of Doctor Who I would be ridiculed for life but it happened.  I know, as fans we have to take the bad with the good so let's move on.

The episode takes a monster nose dive with the Doctor and his new companion Missy acting ridiculous.  It is obvious that Michelle Gomez is well liked by the crew that make Doctor Who.  She gets along with everyone and they have great fun working with her on the show - that is why she is back, not that the character makes a lick of sense in this first part.  Her little head dance, singing and all that stuff is sickening.  It is embarrassing but Moffat keeps her evil by making her kill a few people, reminding us that she is bad guy and it works - most every fan loves her. 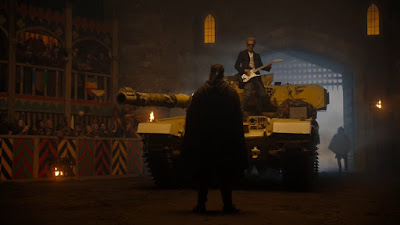 Despite the first 15 minutes being excellent, the following 15 minutes or so are dire and sort of shows us everything that is wrong with the show but somehow the ship rights itself toward the end. We see more glimmers of a good script.  The Doctor has become the Time Meddler and is corrupting the time line with a group of Medieval people.  It is interesting to note that there are the two jokes - Ax fight and fish tank that fail to work because the Doctor is in the wrong time period for them to be effective - thankfully the viewers are.  This happens all the time with Doctor Who and it rarely makes sense other than a direct moment for the viewers and no one else. I do not understand why Moffat feels the need to try to ruin almost every episode with these dumb moments that are meant to get audiences rallied up.  Fans around the globe punch the sky or spit take their beer or fall out of their chairs laughing.  These are not scenes that make any sense nor are they good.  They take audiences out of the moment and trick people into thinking their are good when instead, if  the course, it would have been better.  Did he not have enough script to fill two episodes? Can he not have included some moments where Clara and the Doctor discuss their situation or even some more Missy vs. Doctor banter? 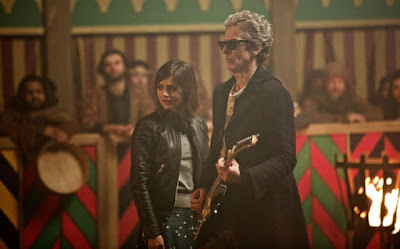 I continue to be confused by all the hate for Clara and the love for Missy.   Nothing in this episode changed my opinion that Clara is one of the top companions in the new era. Clara has been more real than any other companion since Donna.  Missy mimicked her part in the season finale last year with moments of excellence and moments of ridiculous silliness. Her moments at the cafe, bar the large head pop out moment, and all the stuff post Medieval scene are not bad.  If Gomez wre to tone it down it would make her character so much better.  Those good moments make her character evil, not the silliness. I still can't judge Capaldi because of that 15 minutes of garbage with the guitar.  Other than that, he is superb.

I guess I need to accept these moments of embarrassment and stupidity.  I don't understand why Moffat needs to include them but I guess I don't understand why fans like them.  They upset the flow of the script and often do not add anything.  Other shows do have these moments from time to time but they are more subtle.  Doctor Who's moments are exaggerated but obviously, anything can happen, even a head popping out of a screen.

Other than this, the story, effects and everything is good and I am looking forward to the next episode, always hoping for something more.