Doctor Who - The Daemons Review 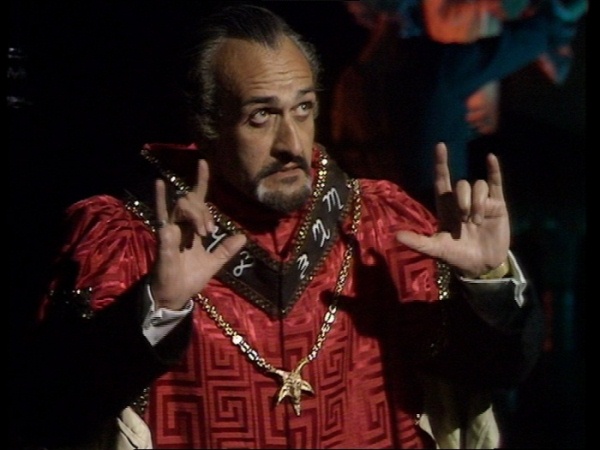 Doctor Who:
The Daemons
By Guy Leopold

“Chap with the wings there. Five rounds rapid.”

There are strange things going on at Devils End.  There is an archeologist dig at The Devils Hump where a witch by the name of Miss Hawthorne is trying to get Professor Horner to stop as she believes great evil will be released.  While catching wind of this The Doctor and Jo head off to Devils End to Devils End and see if they can put a stop to it as The Doctor believes that Miss Hawthorne is indeed right.   To make matters worse The Master is posing as a Vicar for the town and is hoping that whatever is in Devils Hump will give him unlimited power.   The Master is already using black magic to help his cause and using the gargoyle Bok to do his bidding and to help keep a strangle hold on his control over the town.

What lies in Devils Hump is the alien Azal that looks like a version of the devil.  As they open the hatch of what happens to be his ship The Doctor tries in vain to stop them but is too late as the cavern is hit with a cold blast of air which freezes The Doctor and signals the coming of Azal as he is now free to roam the countryside.  So it’s up to The Doctor, when he thaws out, and UNIT to save all of humanity from Azal and The Master. 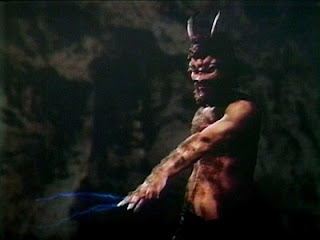 The Daemons is the rare five part story that closes out season eight and also the last story of The Master season.  The Daemons is a classic story that deals with witch craft and the occult dealing mainly with fears of the devil.  Of course The Doctor debunks all this with science and the fact that Azal is actually an alien just adds to the charm of this story.   It is a classic 70’s Doctor Who and one of the best of all time and a particular favorite of mine.

What is different about this encounter between The Master and The Doctor is that they only meet in the last episode and that is the last 10 minutes of the story.  This is not the norm but there are a couple of stories where The Master shows up later and is revealed as the protagonist.  The Doctor and The Master play cat and mouse through most of the story trying to stop the other.  Well mainly The Master is trying to prevent The Doctor from interfering in his plans by sending out his minions to kill The Doctor.  I guess having a cult to do your bidding does have its advantages. 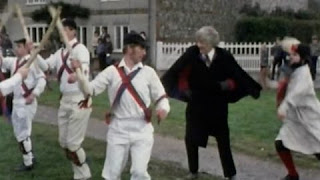 It is pretty entertaining watching to see what The Master has in store next and watching how The Doctor gets out of the predicament.  He was shot at, chased in Bessie by a helicopter and my favorite sees The Doctor being tied up and threaten by Morris Dancers who want to burn him at the stake with the stake being a Maypole.  Luckily the great Wizard Qui Quae Quod had enough magic to save himself from being burned.  Well that and the timely intervention of Miss Hawthorne and the sharp shooting of Sgt Benton.   This is one of my favorite scenes from The Daemons and one of the best from the Pertwee era. 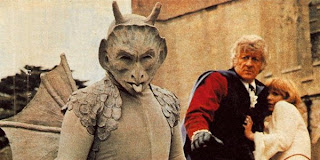 I loved the whole mix of the occult and science aspect of this story.  Here you had The Master using Black Magic to sum up Azal from the Devils Hump.  He used the towns fear and superstition against them.  The Master went as far as offering Jo as a sacrifice to Azal.  The Master also used a gargoyle named Bok to terrorize and to guard the church he was operating in.  I always liked Bok and thought he was one of the best creatures The Master ever used in Doctor Who.  It looked creepy and fired a blast from his fingers that disintegrated you. 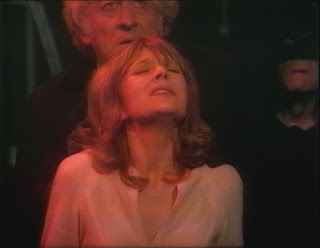 The Daemons has one of those ending that has The Doctor not saving the day.  In fact The Doctor almost got killed by Azal.  What eventually happens is that Jo stands in the way of Azal blast and The Doctor and this causes Azal to self-implode.   Azal could not comprehend Jo’s sacrifice and this act caused Azal’s power to be turned on him and he blew a fuse as The Doctor says.  There are not many endings like that where the Third Doctor is saved by his companion and it is one of Jo Grant’s finest moments in the show.

The Daemons is a timeless classic that has survived the test of time.  You have UNIT finally catching The Master and an alien that looks like the devil.  You have The Doctor explaining to an inept science guy how to make a device that will break a hole in the heat barrier and getting frustrated at him for explaining it over and over.  Yates and Benton get an expanded role in this story also.  They actually have something to do besides firing the guns and being in the background.  Plus you have a great performance by Jon Pertwee also as he delivers some really good dialog at the end with The Master and Azal.  The Doctor and Jo’s relationship seems pretty flawless and you can tell in this story that the chemistry is there and you can see that they are the main pairing during the Third Doctor era.  The Daemons is a fun story to watch and one that you can watch during Halloween as it has that type of feel to it.
Grade A

Email ThisBlogThis!Share to TwitterShare to FacebookShare to Pinterest
Labels: doctor who, jon pertwee, Roger Delgado, The Daemons, The Master