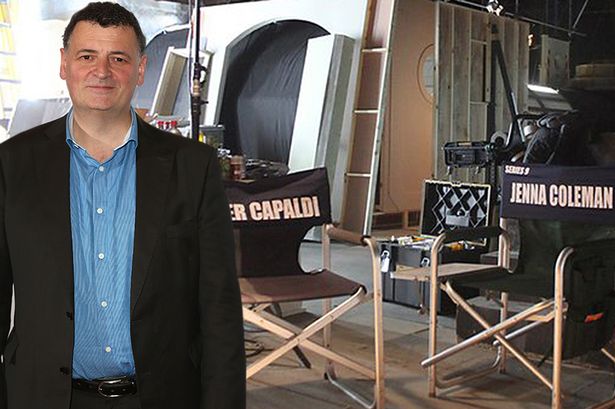 The first of four interviews this week from the BBC Media Centre to promote the new Series of Doctor Who.  Today is Steven Moffat talking about Series 9 which starts on September 19th.

Steven Moffat, Lead Writer and Executive Producer, gives an insight in to what to expect from the ninth series of Doctor Who, returning to BBC One on Saturday 19 September.

Doctor Who is back, how has the dynamic of the series changed since series 8?
Peter Capaldi returns with his second series as the Doctor - it’s the glory years of the Doctor and Clara. They’ve been through the angst, the Doctor has been through his fear of not being a good man, and Clara has been through her fear that this might not be the Doctor. They’re on equal footing with a new dynamic between them and are relishing the Universe. They’re linking hands and running towards a brand new world of epic adventure on a cinematic scale. They are clearly heroes and loving every minute!

How is the series different from last year?

It’s a big, mad and exciting series. You’ll be grinning a lot more and there’s more comedy mixed in with some of the darkest stuff we’ve done - the Doctor’s first big entrance sets the tone.

Why did you decide to reintroduce two-parters?
We’re doing bigger stories and two-parters allow you all those massive cliff hangers. Forty five minutes has served us incredibly well, but it’s time to change it up a bit, change the rhythm. It’s not just about being longer, sometimes it’s about going deeper. And you won’t always be quite sure whether you’re watching a two-parter or not - how much longer the jeopardy will last. We’re aiming to be unpredictable.

Tell us about the guest cast.
We have a vast array of guest cast this year that means we can build on the depth of stories and develop intrigue and backstories even further. We have the magnificent, insane and comedic Missy returning; young outstanding Maisie Williams taking up a new role, as her character challenges the Doctor in unexpected ways; and of course Osgood is brought back from the dead. The Doctor might be in for a surprise with her, this time he might not be able to trust his number one fan.

Did you have any challenges writing for the series?
We always like a new challenge on the show: bringing adventures set on dangerous alien planets; urban thrillers; underwater ghost stories; journeys that take us from Vikings to the end of time itself. We’re pushing the boundaries once again with the most experimental episode Doctor Who has ever made. I’ve written a one-hander for the Doctor, I can’t tell you too much about this, but it’s certainly unique and a big first for the show!
Posted by DR5WHO at 8:47 AM