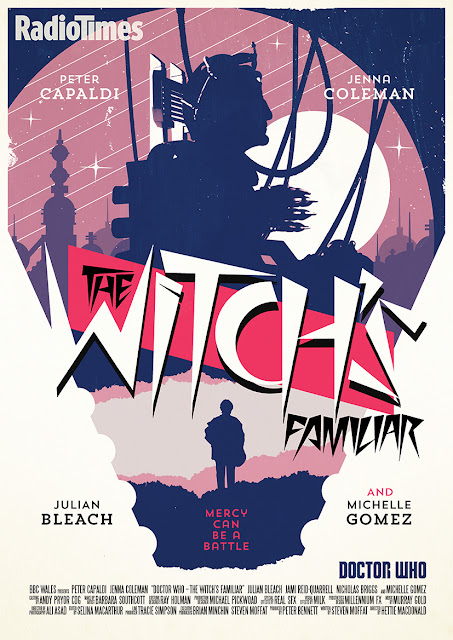 Doctor Who:
The Witch’s Familiar
By Steven Moffat

“You are not a good Doctor."

In Steven Moffat’s recent history his second part of two part episodes has failed to deliver. He does really well setting everything up in part one and giving us a cliffhanger to talk over during the week but when we get the conclusion we are scratching our heads going that was it.  Yes, I have not been a fan of Steven Moffat’s two part stories lately as I thought Series 8 series ender was ok and better than normal but other than that he hasn’t done well with the second part since The Doctor Dances back in 2005’s Series 1. 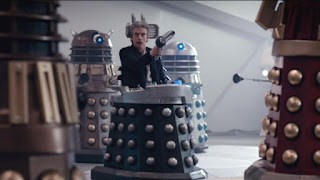 The Witch’s Familiar is the second part of the series 9 opener The Magician’s Apprentice and it has the tough job of explaining what happened to Missy and the Daleks and how will The Doctor escape from Davros.   Well Steven Moffat did a pretty good job answering these questions and in fact gave us a second part that was pretty good.   In fact it I was surprised how good it really was.

I really liked the pairing of Clara and Missy.  It really worked and they seem to have good chemistry between them. I like how sinister Missy is and the fact that Clara does not trust her an inch.  That tension works well and helps with their part of the story as you are waiting to see what might happen to Clara like being pushed into the sewer.  That isn’t even the worst part of what happens to Clara.   Missy convinces Clara to get into a Dalek and act as her capture.  Missy has a more devious plan for this as what she really wants is for The Doctor to kill Clara.  With Clara in the casing when she says her name it comes out as “I am a Dalek.”  So The Doctor would not know it is her.  What a devious and evil plan that Missy came up with.  I was really impressed with this that I just thought it was brilliant.  What a devious way to get at The Doctor if he kills his friend and then when he finds out that he did it that revelation would absolutely destroy him.

What really made The Witch’s Familiar was the scenes with Davros and The Doctor.  In most of their stories they never really had much time to talk.  Sure there was the interrorgation scenes and confront the enemy but they never really had any dialog together that was meaningful.   We get to see The Doctor and Davros talk about why they did what they did and you could see even though they are enemies they do have some respect for one another.  It was actually a quite an emotional conversation as Davros acted like a man dying and wanted to see The Doctor with his own eyes.  Now that was creepy as I never thought Davros’s real eyes were closed but were not there.  It was, to me, creepy seeing two eyes in the black void where they should be. 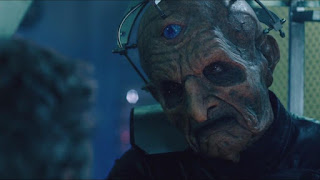 For the most part that part of the story was really good and even the part where everything came unraveled and it was all a trick by Davros to get The Doctor to use his regeneration powers to help give the Daleks ultimate power.    Ok.  The Doctor knew that was what Davros wanted and he also revived the Daleks in the sewers but did he really think that Missy would come to his rescue.   It did not look like that The Doctor was going to get free from the snakes in that machine so how was he planning on getting free?  It was a lot of assumption on The Doctor’s part for that part of the plan to work.  Just seem to convenient of a plot device for Moffat to fall back on but it did work and was just a minor thing like where did Missy get that rope from to tie Clara up with?  It’s just stupid things like that hurt a story a bit. 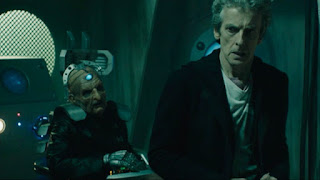 So I guess The Doctor has sonic sunglasses now.  He used them to activate the TARDIS’s return from using the HADS.  Nice touch doing that but come on sonic sunglasses.  It just seems that they are trying too hard to make this Doctor the cool Doctor.  I’m not sure about the sonic sunglasses but I am hoping that they don’t make this a recurring thing and that this was the last we have seen of it.

I liked The Magacian’s Apprentice and The Witch’s Familiar as it was for once a story that was pretty dark and did not have to rely on the sonic screwdriver as a solution.  It was evenly paced and it told a story that you had to watch and pay attention to.  It had some really great moments none more so than when The Doctor saved the young Davros and instilled the meaning of mercy to him.  That was a great touch and was the main reason of saving Clara.   Steven Moffat surpassed my expectation and with only a couple of eye rolling moments he gave us a very enjoyable two part story to start off Series 9.  I’m hopeful that the rest of the season will follow suit and we will have a very enjoyable Series 9.
Grade A